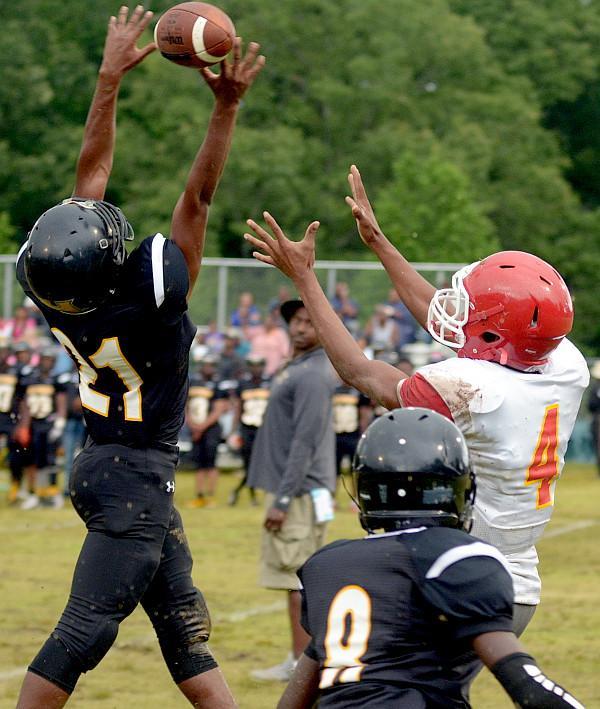 Photos by Ronnie Day
Holly High’s Cadarius Autry (21) deflects the football in one of the spring match-ups. In front is DedQualon Faulkner. 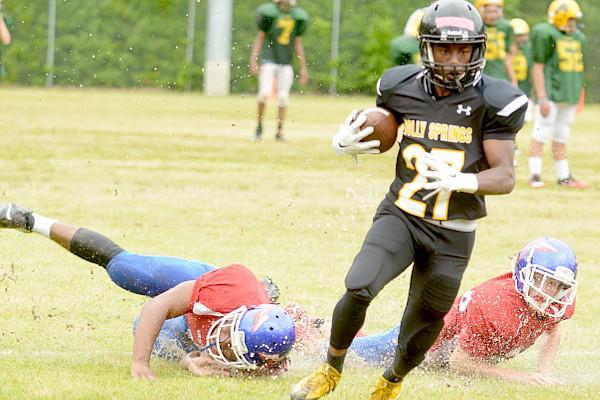 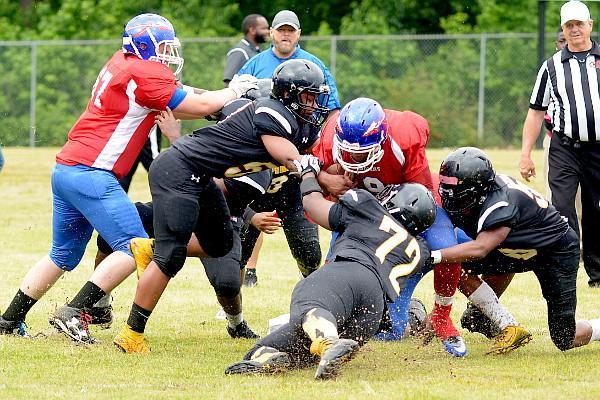 Photos by Ronnie Day
Teaming up to make a tackle versus Byhalia are Hawks Anthony Richmond, Jordan Bowen (72) and Tyren Williams.

Holly Springs will field a young, inexperienced football team in 2017, but coach Donald Deans likes the progress after spring drills.

“We will have a very young team, and our young guys have to step up, especially on the line,” he said.

“We have a lot of kids who haven’t played on Friday nights before.”

Gone are 16 seniors from the 2016 squad. Just one starter returns in the offensive line, plus the Hawks will have a new backfield and new receivers on offense.

“In spring practice, of course, we focused a lot on fundamental skills,” Deans said. “We didn’t work on schemes, and at the jamboree, we had to adjust based on what we were facing from the other teams. I was pleased with the adjustments.”

He said his Hawks, who finished 1-10 last season, will be more run-oriented in the 2017 campaign.

Holly High will remain in Region 2-3A with familiar district foes Independence, M.S. Palmer, North Panola and Water Valley, plus a newcomer to the district, Coa­homa AHS. The Tigers replace powerhouse Charle­ston, who is moving to Region 3-3A.

The non-district schedule includes the big county rivalry to kick off the season, Byhalia on August 18 at home. And then comes some new non-district opponents – like Mantachie, Ashland, Strayhorn, J.Z. George and Tishomingo County. Ashland and Hickory Flat, previously combined for the Benton County Buccaneers, will field their own squads in 2017.

“Our non-district schedule should be an exciting one for us – facing several new opponents, teams we are not too familiar with,” Deans said.

“Our young guys really have to grow up this summer as we prepare for the season ahead.

“I like the camaraderie of this team,” Deans said.

That summer slate will include work in the weight room, plus seven-on-seven competition on Monday nights at New Albany.