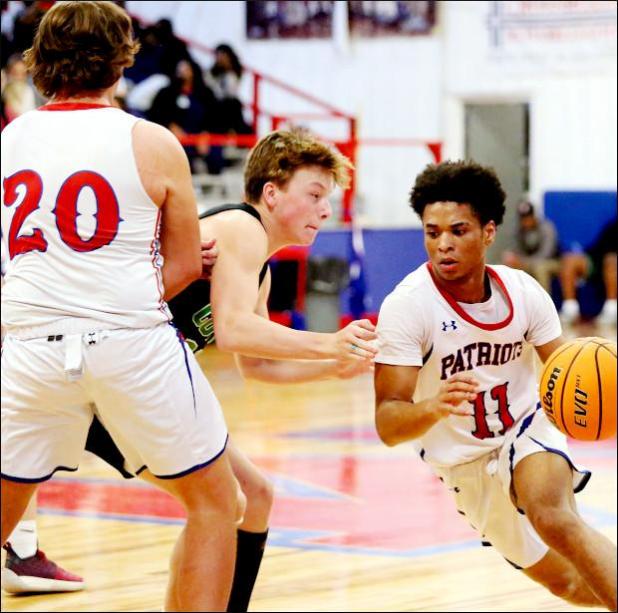 Photos by Theresa Bolden Devore
Dee Howell (11) of MA uses a screen from teammate Jordan Bonds (20) to make his move toward the goal January 26 at home. 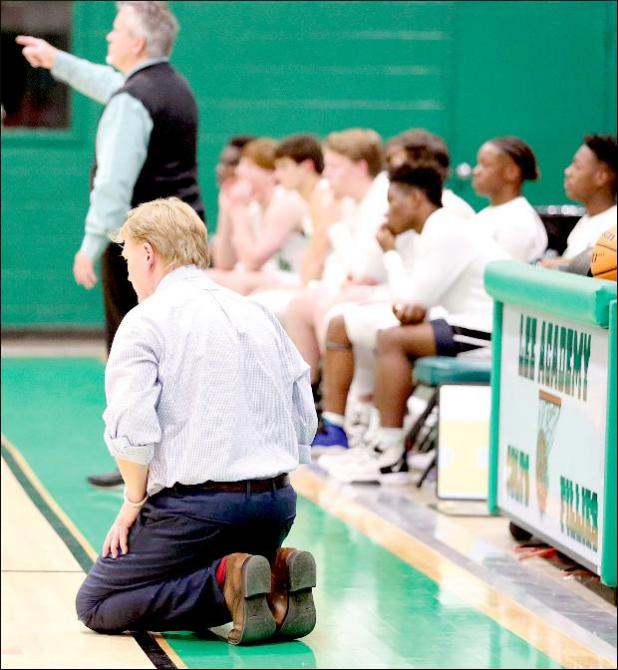 Craig Dailey coaches from his knees in the tense game at Lee.

The Marshall Academy Patriots survived a doubleovertime nail-biter Thursday in Clarksdale to finish undefeated versus District 1-3A competition.

It came after they had defeated Lee by 20 two nights earlier in Holly Springs.

“Wow, what a game,” coach Craig Dailey said. “The guys and I talked about how they (the Colts) were much better than we made them look at our place, and they showed it at their place. I’m proud of my guys and the resilience they showed. We ended the game with one starter on the floor due to fouls.”

The Patriots led 19-10 after one quarter, 37-25 at halftime and 51-44 following three periods. The Colts battled back to tie the game at 58 and sent it into overtime.

MA managed to pull away in the second OT, even though Dailey said it felt like eight overtimes.

Bolden was six of eight from the free-throw stripe in the overtime periods, plus he hit a big three. Howell was three of three from the line in the extra stanzas. Jordan Bonds and Hayes Henry also had some key buckets in OT.

The Patriots conclude the regular season at 10-7 overall and 6-0 in the district.

“The number one seed is always your goal,” Dailey said. “Now we’re 0-0 and the real season begins. We have a shot (at going all the way). We just have to get better each day.” Tuesday night, Jan. 26 at

home, the MA boys gave Lee a little hope in the first three minutes but then exploded for a 77-57 win.

The Patriots fell behind 5-0. Walker Sanders’ three at the 4:40 mark put them up 9-6, and they never trailed again.

Back-to-back buckets from Bolden and Howell made it 35-18. Larkin Bowman drilled a three at the 2:18 mark of the third to up the advantage to 4018.

Lady Patriots The Marshall girls recorded their first district win of the season, 56-49 over Lee January 26 on the home floor. Karah Nicholson hit four threes in the first half as the Lady Patriots pulled ahead 30-23.

Lee battled back to within three at the end of the third.

Nicholson sank five of six free-throw tries in the fourth, plus Kylie Gurley hit some big baskets as Marshall won by seven.

Nicholson finished with a game-high 20 points. Gurley was close behind with 17.

The Lady Colts turned the tide Thursday night at their place, handing the Lady Patriots a 61-50 loss.

The game was knotted at 9 after one quarter. Lee outscored Marshall 17-11 in the second quarter and took a 26-20 halftime advantage.

Lee maintained its margin in the next two quarters, which turned into largely a free-throw shooting contest.

Kailyn Smith had a career night for MA with 19 points. Gurley scored 11 and Evelyn Greer 10.

The Lady Pats conclude the regular campaign at 7-9 overall and 1-5 in the district.

The Patriots and Lady Patriots will welcome fellow district teams to Holly Springs this Thursday and Saturday as tournament time begins.