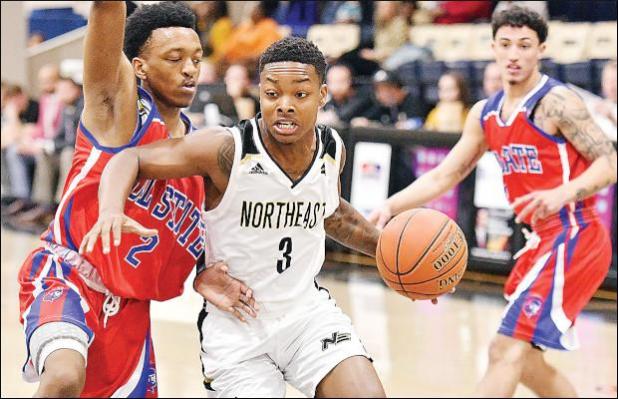 Photos courtesy of Northeast Mississippi Community College
DeAnthony Tipler (3) of Ashland drives to the goal for the Northeast Tigers. 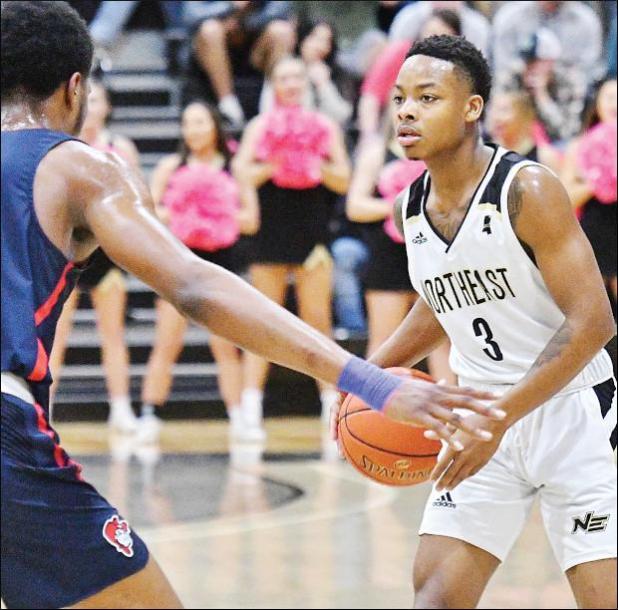 DeAnthony Tipler (3) runs the offense for the Northeast basketball team.

Northeast The leading scorer in the Magnolia State has rightfully secured his place among the top basketball players in the entire country.

"This is a very prestigious honor for him and our program," said Tigers head coach Cord Wright. "This just really puts a nice ending to his great career at Northeast. He will continue to do great things at his next stop, but no matter what, he will always come back to Northeast as an AllAmerican."

Tipler was a key component for the Tigers during one of their most successful seasons since the turn of the century. Northeast won 24 of its initial 25 games and finished with a No. 18 national ranking from the NJCAA.

The Tigers also captured the Mississippi Association of Community and Junior Colleges (MACJC) North Division championship for the 17th time in school history thanks in part to Tipler's hot shooting.

The Coastal Carolina (S.C.) University signee racked up 20.4 points per game. Tipler is the first Northeast standout to average more than 20 points since Travis Lee posted 21.7 points during the 2007-08 campaign.

The 20.4 points per game was the top mark among all 15 Mississippi community colleges, and it also appears after some quick research that his average led all colleges and universities in Mississippi as well. Ole Miss' Breein Tyree was second with 19.7 PPG.

Tipler reached double figures during all but one of the Tigers' 27 total outings this year. He scored 20-plus points in 14 of those matchups, which included two games of more than 30 points.

He set a new career-high with 41 points on 14 of 20 shooting overall during a home triumph over East Mississippi Community College. Tipler also produced a 33-point effort in Northeast's victory versus Wallace State (Ala.) Community College at Hanceville in November.

Tipler recorded a pair of double-doubles during his final year in the City of Hospitality. His first such instance was nearly a triple-double with 25 points, 11 rebounds and eight assists in a win at Wallace State-Hanceville.

The Ashland native repeated that feat against Southwest Mississippi Community College with 19 points and 10 boards during the Tigers' MACJC Tournament quarter-final triumph. He compiled a solid 43.1

field goal percentage with a 37.8 percent mark from beyond the arc, which was second highest on the team. Tipler had the second best free throw percentage for Northeast as well at 85.5.

Tipler also averaged 4.8 rebounds, four assists, 1.5 steals and a team-high 29.8 minutes with a 1.2 assist-to-turnover ratio. He tied for a season-best three steals on five different occasions.

He was a two-time MACJC Player of the Week winner during the 2019-20 campaign. Tipler also garnered that same award once, as a freshman after a 40-point performance versus Lawson State (Ala.) Community College.

The 6-0, 170-pound guard tallied 551 points as a sophomore alone. The last Tiger to score more than 500 points in a single season was Leroy "Shaq" Buchanan, who now stars for the Memphis Hustle in the National Basketball Association (NBA) G League.

Tipler's final career numbers over the course of his incredible two-year stint on the Booneville campus include 889 points, 201 assists, 186 rebounds and 85 steals in 53 total appearances.

"It means a lot to me because of how much work I had to put in and the sacrifices I had to make to become the best player that I could be," Tipler said. "Coming to Northeast is the best decision I've made so far in my career."

Tipler is the 18th Northeast men's basketball student-athlete to gain All-American distinction from the NJCAA, which is the most of any program in the MACJC. He follows in the footsteps

of Dimario Jackson and Buchanan, who have both received All-American laurels since Wright became head coach of the Tigers before the 2013-14 season.