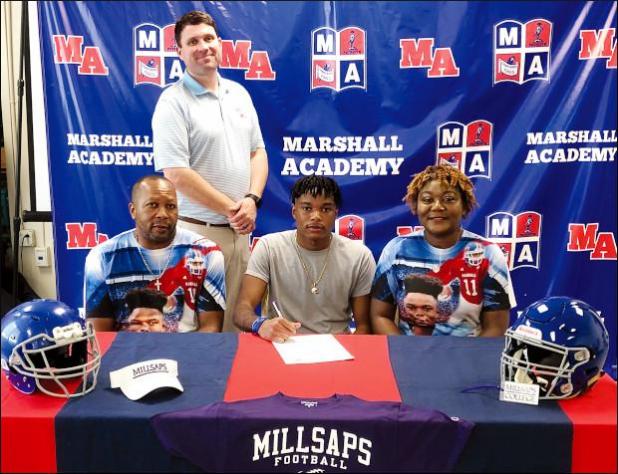 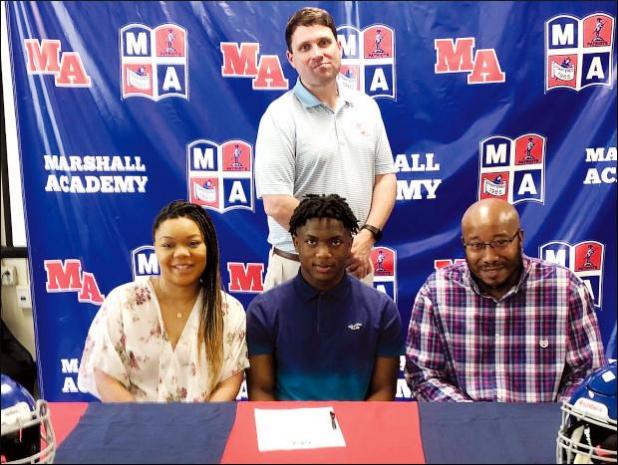 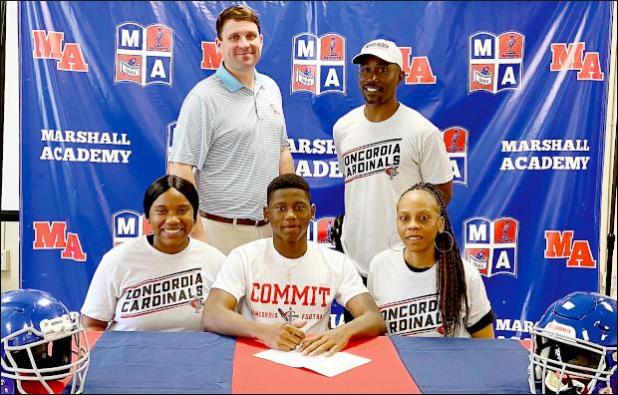 Seated with Sam Greer are his sister, Evelyn Greer (left), and his mother, Denesha Greer. Standing are Barrett Donahoe, his head football coach at MA, and his father, Sam Greer.

Philip Parks signed with Bethany College in Kansas and Sam Greer with Corcordia University in Michigan, while Anthony Mayfield is staying in his home state with Millsaps.

Parks' athletic scholarship includes both football and track for the Bethany College Swedes.

"Philip is a phenomenal athlete who has all the potential in the world," said Barrett Donahoe, his head football coach at MA in 10th through 12th grades. "I feel he can be very successful at the next level, with his speed and athleticism, if he will continue to get better. I'm excited for him as he continues his athletic career."

Greer will play football for the Concordia University Cardinals after suiting up for the MA Patriots in 11th and 12th grades. "Sam was inexperienced when he came to

Marshall Academy ­ from a football standpoint," Donahoe said. "He was a leader. I really enjoying coaching him. He is a great kid with a good work ethic. I think he can be very successful in whatever he chooses to pursue. I wish him the best as he goes up North to play football."

Mayfield, who played for Donahoe's Patriots in the ninth-12th grades, moves on to be a member of the Millsaps Majors football and track teams in Jackson.

"Anthony is a tremendous kid," Donahoe said. "It was such a pleasure to coach him four years at Marshall. I wish him the best at Millsaps. It's a good place and a good program. I hope it all works out well for him."

The three athletes graduated from Marshall Academy on Monday, May 18, the same day they signed the scholarships.