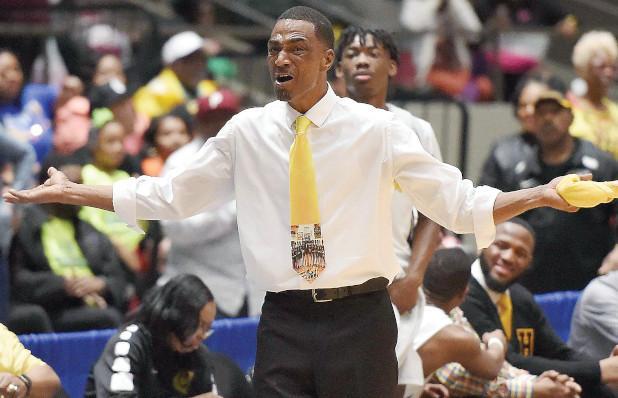 Photo by Chris Todd
Kenzaki Jones coaches his HollySprings Hawks during the Class 3Asemi-finals at Mississippi Coliseum in Jackson. 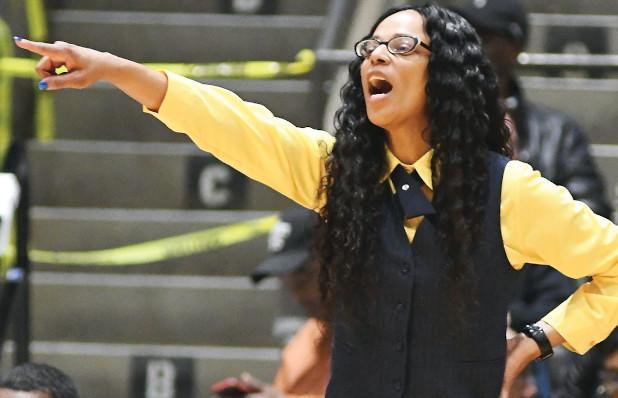 Photo by DeMill Dixon
Tosheba Jones coaches her Senatobia Lady Warriors in the 3A semi-finals at Jackson. The Lady Warriors went on to win the state championship at The Pavilion at Ole Miss.

Siblings on the sideline

Kenzaki Jones, head boys coach at Holly Springs, and Tosheba Jones, head girls coach at Senatobia, both had their teams in the final four at Mississippi Coliseum.

"It's always a challenge to get there, and to be able to be there together, it made it that much more special," Kenzaki said. "And to be able to play back to back, that was special."

The Lady Warriors defeated Crystal Springs and advanced to the Class 3A championship game at Ole Miss. In the next game, the Hawks lost to St. Andrew's in the 3A semi-finals and ended an outstanding season at 258.

"Walking off the court after our game and seeing him in the tunnel with his arms open and getting that hug, it was so special to be able to share that moment," Tosheba said.

She said after her brother got the Holly Springs job in late October, right before the season started, she told him, "We've both got a shot. "He handled his business,

and I handled mine. We continued to push each other all season long.

"I got the district championship and he fell short (runner-up). I told him his road would be a little harder, as far as making it to the final four, but I knew his team could do it.

The two also coached backto-back basketball games in the 3A quarter-finals at Itawamba Community College in Fulton.

"At Itawamba, I told him, `we have to do it,'" Tosheba said. "We gave each other hugs, and we both went out and got it (the trip to the state final four)."

Tosheba said she and Kenzaki talked the morning of the semi-final games at "The Big House" in Jackson.

"I wished his team could have advanced (to the state championship game), but things just didn't fall their way," she said. "Holly Springs had a great team, one of the best."

Tosheba's Senatobia team went on to defeat Ruleville Central 57-45 for the Class 3A state championship. The game was played March 7 in The Pavilion at Ole Miss.

"This was a special team," she said.

Kenzaki said, "It was a tremendous accomplishment for her and her team. "She does a great job there.

She's involved with those girls, too, a mother figure to all of them. I'm proud of her. "

Sports were a big part of the siblings' upbringing. Their father, Fred, was in the military, and they lived lots of places. He is retired and living in North Carolina. Kenzaki said they got their competitive nature in basketball from their mother, Rena, who played at Senatobia and Northwest. She lives in Senatobia.

"She was a heck of a ball player," Kenzaki said.

"And she's our number one fan," Tosheba said. "She was right behind the bench (at the state semi-finals)."

"She's the loudest in the gym, next to us," Kenzaki said.

He and his sister were once on the same youth teams when their dad was stationed in Germany.

"She played with the boys; I have fond memories of that," Kenzaki said.

"They didn't have a girls team," Tosheba said. "Some of the guys, when they saw me, gave me a look like, `yeah right?' But I always held my own. I ended up starting on the boys team."

The siblings competed against each other, too.

"I was better defensively," Tosheba said. "He was better offensively."

"I always ran behind her," Kenzaki said. "She challenged me. I always tried my best to outdo her."

Both were multi-sport, talented athletes.

"We grew up playing ball, all kinds, soccer, baseball, softball; you name it," Kenzaki said.

Tosheba graduated from Senatobia High School in 1995 and played basketball at Northwest and West Alabama.

Kenzaki graduated from Senatobia in 1996, played on a state championship basketball team and then chose to go to Mississippi State and play football.

Tosheba has been employed at Senatobia 19 years. She has coached 17 years, 15 of those at the high school level.

"We've just stayed in sports all our lives," Kenzaki said. "That's how we were raised. We love it."