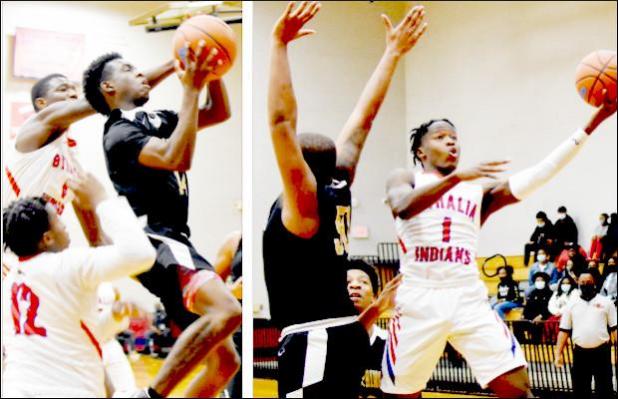 Photos by Barry Burleson
(Left) Holly High's Ded'Drick Faulkner soars toward the goal with opposition from Indians Jamarion Austin (0) and Derrick Beard (12). (Right) Byhalia's Jerrick Wooten (1) gets past Hawks Dylan King (23) and Anthony Gulledge Jr. (50) on his way to the hoop.

There was a lot for coach Derwin Cooper to like after his Byhalia basketball team knocked off Marshall County rival Holly Springs Friday night.

“I thought we played great basketball, particularly in the second half,” he said.

“We didn’t force shots, and we played hard on the defensive end, boxed out well.” The Indians, who led by four at the half, pulled away in the final 16 minutes to get a 71-55 District 1-3A win over the Hawks.

Byhalia moved to 3-0 in the district race, while Holly Springs dropped to 22.

“It was an exciting win for us,” Cooper said.

The teams swapped leads a few times in the opening quarter.

The Hawks’ Marquavous Jones drove the baseline and dunked, but the Indians’ Derrick Beard answered with a three to tie the game at 8. The teams then swapped threes, Ded’Drick Faulkner of Holly High and Jacorian Smith of Byhalia.

DeQuan Moore scored off a Holly High turnover to close the first quarter. The Indians were up 19-17.

Byhalia led by as many as five in the second quarter. Dylan King’s putback for the Hawks trimmed the deficit to 32-31 with 16 seconds remaining. Then Smith sank a long three at the horn to make it 35-31 in Byhalia’s favor at intermission. Holly High cut it to one to start the

second half but didn’t get any closer the rest of the way.

The Indians upped their advantage to 51-42 at the end of the third.

They were up 10 when Smith hit a three early in the fourth. But the Hawks managed to cut it to five, 56-51, on Faulkner’s drive to the hoop. He scored, was fouled and hit the free throw.

Byhalia outscored Holly High 15-4 in the final five minutes. Smith hit another three and then cashed in six of six free-throw tries.

The Indians were 16 of 20 from the charity stripe and the Hawks seven of 10.

“We’re struggling to close out games,” said Andre Jones, head coach of the Hawks. “We compete or win the first halves but failure to close games properly leads to losing. That’s what we’re experiencing.

“Games like this one is a growing pain we have to learn from. Lacking the experience we’ve had in previous years is placing a lot of demand on my players to do things they are not used to doing.

“We are trying to grow fast and together. We don’t make excuses. We simply aim to get better.

“I commend Byhalia on their effort and hustle to get the victory.” Top scorers for the Indians were Smith with 27, Beard with 12, and Jamarion Austin, Jerrick Wooten and Moore with 10 each.

For Holly High, Faulkner led the way with 18. Also scoring in double figures were Jones with 14 and Charvez Ambrose with 11.

Coach Cooper said he believes his Byhalia squad is coming together.

“Togetherness, we stress it every day,” he said. “Hopefully, we can keep the train rolling and stay focused.”