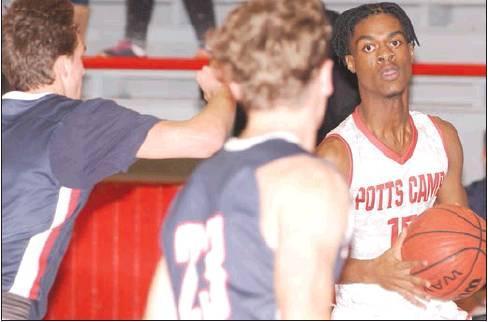 Potts Camp’s Kylan Conners (15) looks to get around a couple of Lewisburg Patriots.

Potts Camp teams down 5A Lewisburg

The Class 1A Lady Cardinals knocked off Class 5A Lewisburg 53-38 at home.

“We executed better on offense and defense,” McCullough said.

“The girls are working hard in practice and I’m starting to see that carry over into the games.”

Potts Camp began its season facing the likes of Hernando, Ingomar and Lafayette.

“Hopefully that type of competition will make us better in the long run,” he said.

The Lady Cardinals went up 4-0 early on Lakayla Collins’ drive to the goal. Mackenzie Brownlee hit a shot, was fouled and sank the free throw to push the advantage to 7-2. The lead was stretched to 14-6 at the end of the first quarter

With 29 seconds to go in the first half, Collins went the length of the floor for a bucket. It was 29-18, and Potts Camp carried a 29-20 lead to intermission.

Brenya Muse drilled a three midway through the third to put the home team up 35-25.

The Lady Patriots climbed to within six at the 5:09 mark of the fourth. But when Jazmine Anderson scored back-to-back buckets, the Lady Cards were up 47-36 with 2:56 left and went on to win by 15.

Anderson finished with a game-high 20 points. Brownlee added 12 and Collins 10.

A strong second half lifted the Potts Camp boys to an 80-69 victory over Lewisburg.

Coach Jeremy Dillard’s team, leading by two at intermission, outscored the Patriots 48-39 in the second half.

“It’s always nice to get a win,” Dillard said. “I thought offensively we played pretty well. I think the third quarter may have been our best-played quarter of the season. We now have to be able to do it every night for four quarters.”

The Cardinals fell behind 9-4 but cut the deficit to two on Shun Gardner’s bucket and free throw. They trailed 15-11 at the end of the opening period.

Potts Camp snatched the momentum with 3:46 to go in the second quarter. Kedavion Faulkner made a steal and traveled quickly to the hoop for two points, putting the Cards in front 21-20. They never trailed again. The lead was 32-30 at the half.

Faulkner opened the second half with a three-pointer. At the 6:48 mark of the third, Mitchell Saulsberry dunked, and it was 41-30.

Lewisburg got back to within three, but the home team’s lead was 54-48 after three.

Walter Hamilton started the fourth with a three and a minute later teammate Martavious Frost got free for a dunk. It was 61-48, and the Cardinals coasted from there.

Saulsberry led the scoring with 22 points. Also reaching double figures were Faulkner with 12, Hamilton with 10 and Jaquives Muse with 10.

“Defensively, we are still a work in progress,” Dillard said. “Lewisburg did a really good job of making some open looks. I see us improving in areas and that’s all you can ask for during this part of the season.”

The Lady Cardinals (1-5) and Cardinals (2-1) played in the Wheeler Turkey Tournament on Thursday and Friday of last week. The boys played in the Walnut Classic on Tuesday of this week. They will face Biggersville Saturday, Nov. 24, at 9 a.m. in the Lighthouse Classic at Corinth.