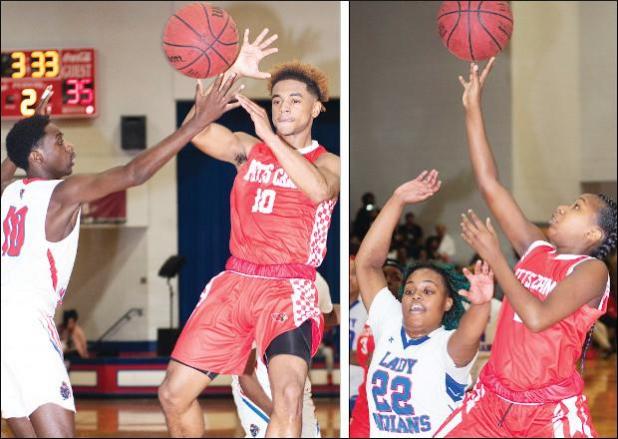 Photos by Dillon Day
(Left photo) JaQuives “Nuk” Muse (right) of Potts Camp is defended by Byhalia’s Ladarius Rucker. (Right photo) Shaleigha Faulkner puts up a shot for the Lady Cardinals as Darianna Wilson (22) of the Lady Indians tries to distract her.

Both the Lady Cardinals and Cardinals snatched victories over Byhalia – the girls winning by three and the boys by 16.

“It was a really good night, getting two huge wins against two really good Byhalia teams,” said Jeremy Dillard, head coach of the Potts Camp teams. “We treated it like playoff games, with us a 2A going against a 3A, because we knew it would be a loud atmosphere and a chaotic atmosphere. It felt like a late February or early March game.”

The Lady Cards dug themselves out of a first-half hole, rallying to win 67-64.

Jasmine Malone came out on fire for the Lady Indians. She scored 12 in the first quarter as the team pulled in front 19-8.

“We had a hard time getting into a rhythm,” Dillard said, “and Jasmine (Malone) had her way with us.”

The Lady Cardinals out-tallied the Lady Indians 20-10 in the third to cut their deficit to just one, 47-46. They then pulled ahead prior to the final horn, cashing in some key free throws down the stretch.

“In the second half, we changed our defense up and I challenged the girls to show how much heart we had. We got back in the ball game and completely swung the momentum in our favor. I was proud of the effort.”

Faulkner was the top gun for Potts Camp as she scored

For Byhalia, Malone lit up the scoreboard for 28, Araiyen Hodges contributed 13 and Darianna Wilson 12. Malone also had eight steals.

The Potts Camp Cardinals had the offense in high gear in the second game of the night as they turned back Byhalia 92-76.

The Cards scored 45 points in the first half and 47 in the second.

They were up 70-64 entering the fourth quarter and pulled away by outscoring the Indians 22-12 in the final eight minutes.

“It’s no secret – the rivalry between Marshall County schools,” Dillard said. “Byhalia has long been a top-tier team, and our boys wanted to prove they could go there and win on the road.

“This win will pay dividends on down the road as far as playing well in hostile territory. I was extremely proud of my guard play; we only had nine turnovers.”

Leading a balanced Potts Camp offensive attack were Mitchell Saulsberry with 21 points, JaQuives Muse with 15, Martavious Frost and Marquis Turnage with 14 each and Kedavian Faulkner with

11. Turnage hit four threes, three of those in the second half.

Byhalia had four players scoring in double digits – Ra’Mond Tuggles with 24, Jacorian Smith with 19, Jerrick Wooten with 12 and Xzaverion Crockett with 11. Fifteen of Tuggles’ game-high 24 points came in the second half. Smith was six of seven from the freethrow stripe and also dished out four assists.

Leading rebounders for the Indians were J. Wooten with eight, and Smith, Tuggles and Crockett with seven each.

The Lady Indians (3-2) and Indians (4-1) visited Rosa Fort on Friday of last week. They hosted the Byhalia Thanksgiving Shootout on Tuesday of this week.

Potts Camp teams eased to wins over Coldwater Thursday night at home – the boys winning by 41 and the girls by 42.

Saulsberry scored 16 of his game-high 26 points in the first quarter as the Cards took control and went on to rout the Cougars 87-46.

Frost followed with 18, and Faulkner scored 15.

The Lady Cards stormed ahead 30-7 at halftime and crushed Coldwater 58-16.

Faulkner and Chanyce Collins scored 14 each in the win. Kaneisha Brittenum and Muse added 10 each.

The Lady Cardinals (4-2) played Blue Mountain onthe road last Tuesday. The Cardinals (5-0) faced Itawamba in the Saltillo Shootout this past Monday. Both teams will host H.W. Byers next Tuesday, Dec. 3.