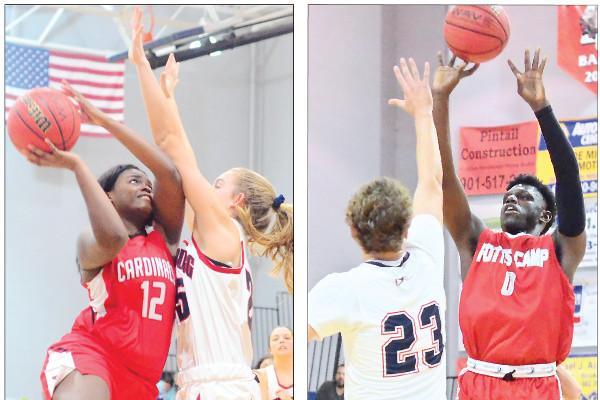 Potts Camp teams repeated Friday night what they did back on November 13 as they swept Lewisburg.

This time the 1A Lady Cardinals and Cardinals picked up road wins over the Class 5A foe.

The second quarter was the difference as the Potts Camp girls turned back the Lady Patriots 49-42 last week.

They outscored the home team 15-4 in that period to take a 21-9 halftime lead.

Lewisburg put together a rally in the third but Chanyce Collins scored nine of her 14 points in the fourth as the Lady Cards nailed down the seven-point win.

Also in double-digit scoring for Potts Camp were Jazmine Anderson with 13 and Lakayla Collins with 12.

The Cardinals, in the nightcap, trailed early but rallied strong and beat the Patriots 65-53.

Potts Camp fell behind 18-13 after the opening quarter. But then the visiting squad outscored the home team 21-11 in the second, 21-15 in the third and 10-9 in the fourth to claim the 12-point victory.

Kedavian Faulkner hit four threes in the win and led the Cards with 20 points. Mitchell Saulsberry followed with 18, and Jaquives Muse added 12.

The Potts Camp boys had the tall task of facing 6A Southaven in the Ingomar Shootout Saturday night and dropped an 80-40 decision.

The Chargers built a 38-18 halftime lead and outscored the Cardinals 42-22 in the second half.

Saulsberry had 16 points for Potts Camp, with 12 of those coming in the second half. Faulkner had 10.

The Lady Cardinals (2-8) and the Cardinals (6-3) will visit Nettleton Friday night. They will host Independence next Tuesday, Dec. 11.

On Saturday, Dec. 15, the girls will play in the Wildcat Shootout at Calhoun City, and the boys will participate in the Biggersville Christmas Tournament.