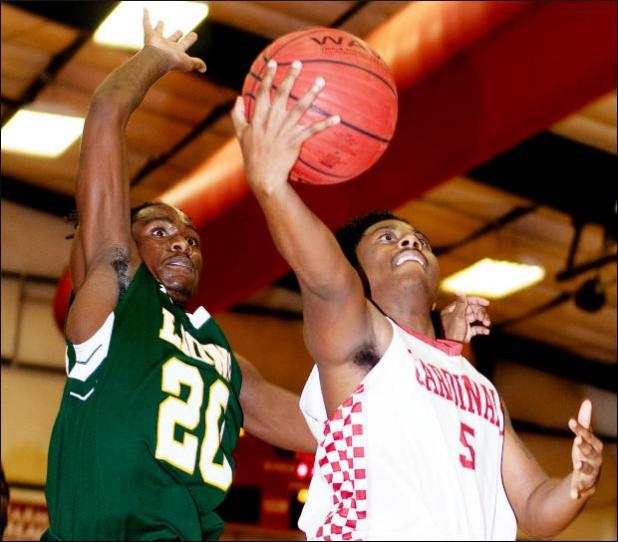 Photo by Dillon Day
T.J. Jackson (5) of Potts Camp soars to the hoop with Byers’ Malik Glover (20) going for the block.

Marshall County rivals Potts Camp and H.W. Byers hooked up in a pair of close games on the hardwood Tuesday of last week.

Both Potts Camp teams were victorious – the girls by nine points and the boys by six.

The Lady Cardinals’ Malasha Faulkner and the Lady Lions’ Jakorien Hubbard grabbed the spotlight in the first game of the evening, a 54-45 Potts Camp win.

Faulkner lit up the scoreboard for a game-high 25 points, 21 of those coming in the first half. She hit five threes, all in the first 16 minutes of the contest.

Hubbard was close behind as she poured in 24 points for Byers. Fourteen of her points came in the second half.

The Lady Cards looked to have a commanding 38-15 lead at halftime. But the Lady Lions didn’t quit, outscoring Potts Camp 30-16 in the second half, and slicing the final deficit to under 10 points.

Anteyonna Williams also had 13 for Byers.

In the nightcap, the story was sort of the same. The Potts Camp boys surged ahead 34-18 at intermission and held on for the 64-58 win.

Mitchell Saulsberry was the top point producer for the Cards. He scored 21, with 10 coming in the fourth quarter. Kedavian Faulkner followed with 17, and Walter Hamilton scored 11.

For the Lions, Devin Moore had a game-high 23 points. Hitting for 11 each were Kadarieus Rhyan and Malik Glover.

Byers outscored Potts Camp 40-30 in the second half but its rally try fell short.

Both Potts Camp teams were matched against the host school Saturday in the Doc Vandiver Classic at Baldwyn.

The Cardinals got 26 points from the game’s most valuable player, Saulsberry, and they earned the hard-fought 70-66 victory and remained unbeaten.

The game was tied at 30 at halftime. Then Saulsberry powered a big third quarter for the Cards, who outscored the Bearcats 23-12 in that eightminute span. He had 12 points in the third.

Three other Cardinals scored in double digits – Martavious Frost with 13, Jaquives Muse with 12 and Hamilton with 11.

Faulkner got off to a good start, scoring nine points in the first quarter, and finished with 23. Muse added 15.

The Lady Cardinals (5-4) and Cardinals (8-0) visited Independence Tuesday. They host Mooreville Friday. The girls will then play in the Sykes Orvis Shootout at Walnut on Saturday. Next Tuesday, Dec. 17, Potts Camp teams host Holly Springs.