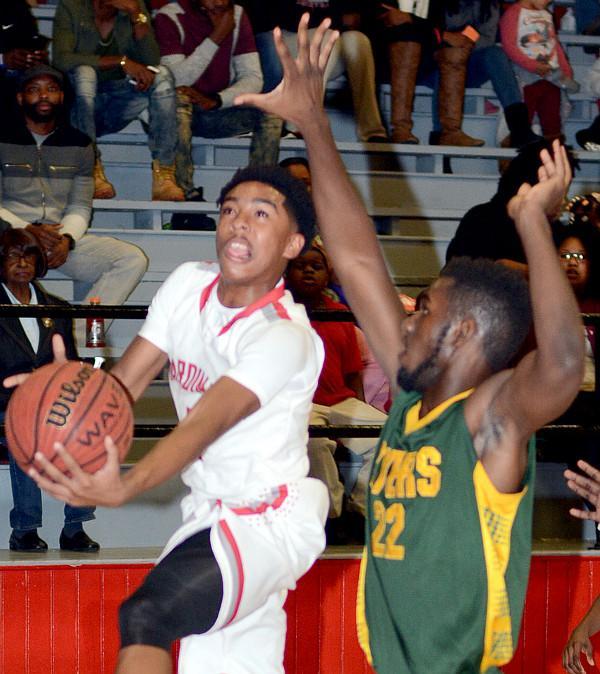 Photo by Dillon Day
Micah Powers of Potts Camp tries to get around Lequavius Jenkins of H.W. Byers on his way to the goal. 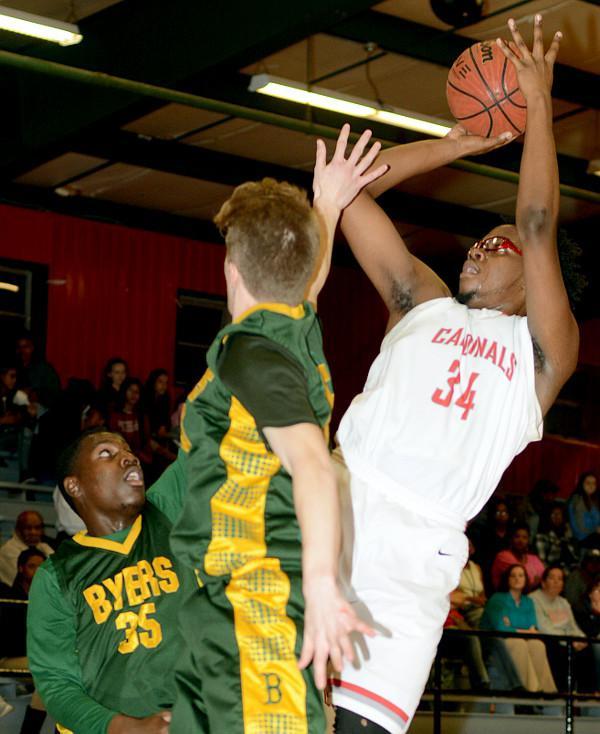 The Potts Camp and H.W. Byers boys hooked up in a doozy of a district game Tuesday night of last week.

The Cardinals, playing at home, held on in the fourth quarter for a 53-49 win in the intra-county rivalry and also a District 1-2A contest.

Potts Camp led 15-9 after one quarter and took a 19-17 advantage to the locker room at halftime.

The Cards outscored the Lions 21-14 in the third period to take a nine-point lead (40-31). Mitchell Saulsberry scored nine points in the third and Micah Powers six.

But the Lions continued to fight. Kadamion Rhyan nailed four three-point shots in the fourth.

Potts Camp survived to win by four. Shaun Gorman scored seven points in the fourth for the Cardinals.

Kadamion Rhyan had a game-high 18 (six threes) for Byers and Kaderious Rhyan contributed 12.

The game between the Lady Cardinals and Lady Lions wasn’t nearly as close, as Potts Camp picked up the 58-21 victory.

Leading the way for the winning team were Destinee Hannah with 20 points, 18 rebounds and five steals; LaKayla Collins with 12 points, five assists and two steals; and Ashley Anderson with 11 points and nine rebounds.

For H.W. Byers, Myesha Buffington cashed in 11 and Dallas Fitzpatrick scored the other 10.

Potts Camp teams took to the road Friday night and dropped a pair of district games at Baldwyn – the girls 71-29 and the boys 68-60.

The Lady Cardinals stayed within striking distance in the first half, down 14-8 after one quarter and 38-24 at the half, but the second half was a different story.

The Lady Bearcats out­scored Potts Camp 33-5 in the final 16 minutes of the contest.

Collins was the only Potts Camp player scoring in double digits. She had 10.

The Cardinals put up a stout fight versus the Bearcats, ranked fifth in the state in Class 2A.

Saulsberry was a second-half force for the Cards. He scored a game-high 25 points, with 19 of those coming after the intermission. He also had eight rebounds.

The Lady Cardinals and the Cardinals, both 9-14 overall and 1-2 in district play, visited Ingomar on Tuesday of this week. They will host Mantachie Friday and then host East Union next Tuesday, Feb. 7. All of those are district games.

The Lady Lions and Lions journeyed east on Highway 72 to Alcorn Central Friday night and split the games.

High scorer for the Lady Lions was Fitzpatrick with 14.

Kadamion Rhyan was the top gun for the Lions. He poured in 28 points.

The Lady Lions (0-18 overall and 0-4 in the district) and the Lions (4-14 and 2-2 in the district) hosted Walnut on Tuesday of this week. Then they will host Baldwyn Friday. Those are district opponents.

On Saturday, Feb. 4, the Lady Lions and Lions go to Coffeeville, and next Tuesday, Feb. 7, they visit Marshall Academy.