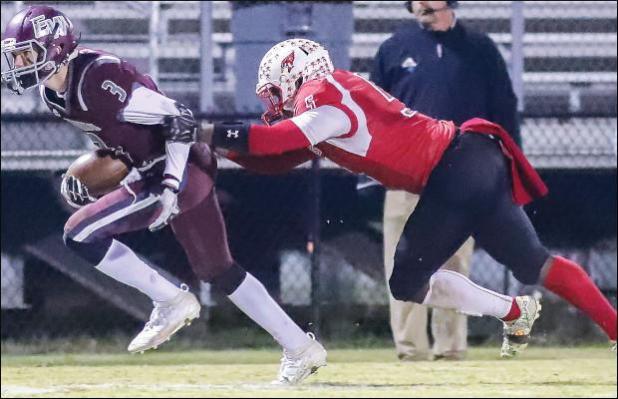 Potts Camp falls in opening round

Coach Darrow Anderson knew his team faced an uphill challenge in round one of the Class 2A state football playoffs. “East Webster is 10-1 for a reason,” he said.

The Cardinals made the road trip to Maben Friday night and fell 42-0 to the Wolverines. It was the first post-season berth in the 10-year history of the Potts Camp football program.

“They were a lot bigger and stronger than us,” Anderson said. “They were big up front, and had a good quarterback and running back.

“I thought we hit them hard early. Then their quarterback threw a couple of darts into tight coverage.

“The majority of their touchdowns came on the run. We just couldn’t stop them with that big line they had.”

He said his Cardinal offense had a couple of chances early to put points on the scoreboard.

“We ran a trick play on the second play of the game and overthrew it,” Anderson said.

“Then we got inside the 10 another time and couldn’t punch it in.

“We couldn’t run the ball effectively and went to the passing game. We threw it well at times, but they put a lot of pressure on the quarterback.”

The Cardinals finish the season with a 5-6 record and third place finish in Region 1-2A.

“This team accomplished things that have never been accomplished at Potts Camp,” said Anderson, wrapping up his second season at the helm. “This senior group has a lot to be proud of.

“We have a bunch of younger kids coming up, and a lot of those already have playing experience.

“We have to take what we did this year and build on it.”

East Webster moves on to face Pelahatchie in round two of the playoffs.