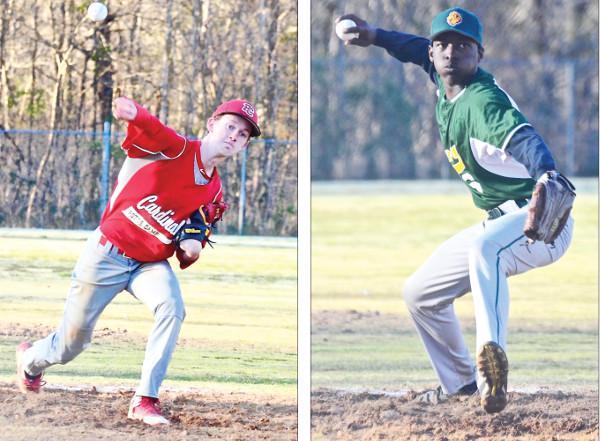 Photos by DeMill Dixon
Shown pitching during the Marshall County match-up last week are Ty Bolden (left) of the Cardinals and Jadarius Hurt of the Lions.

Potts Camp dominated cross-county rival H.W. Byers on the baseball diamond last week, got a win over Strayhorn and lost at Ingomar.

The Cardinals downed the Lions 17-0 on the road Tuesday, March 26, in Region 2-1A action. A second match-up between the Marshall County squads was set for last Friday but postponed.

Potts Camp scored 13 runs in the bottom of the first at Byers. Crossing the plate twice in the inning were Landon Houston, Caleb Holmes, Jase Aldridge and Ty Bolden.

Devin Sanders had two doubles and three RBIs in the first inning. Holmes had a double and one RBI.

The Cardinals added four more runs in the second to end the game early.

Houston had a single and then Holmes singled and drove in two runs. Sanders added his third double of the contest and picked up two more RBIs for a total of five.

Bolden pitched a no-hitter and got the mound win. He struck out three.

The Cardinals began last week by playing on the home field and knocking off Strayhorn in a scoring fest, 10-8. Coach Dustin Minor’s team had a huge bottom of the first, scoring nine runs on four hits, five walks and a Strayhorn error. Houston had a pair of singles in the inning and two RBIs. Nick Nichols had a big double and two RBIs. Randy Cross drove in a pair of runs, and Bolden singled.

The Cards scored their other run in the third and led 10-2. Peyton Aldridge led off that inning with a single and later scored.

The Mustangs mounted a rally, scoring two in the fourth, two in the fifth and two in the sixth, but Potts Camp was able to close the door.

Houston started on the mound and got the win. He threw 120 pitches. Providing relief work, with 18 pitches, was Bolden.

The Cardinals visited Ingomar Saturday and dropped a 16-1 decision.

Potts Camp’s lone run came in the top of the first. Houston singled and then Holmes picked up an RBI.

The Cards sent just 10 players to the plate in the next three innings, going three-up, three-down in both the third and fourth.

Houston started on the mound for Potts Camp, and Bolden tossed in relief.

The Cardinals (6-6 overall and 3-2 in the district) were scheduled to visit North Panola Monday.

They will go to Tremont Thursday for a 4:30 p.m. start and then host North Panola Friday at 5 p.m. Next Tuesday, April 9, they go to Hickory Flat at 4 p.m.