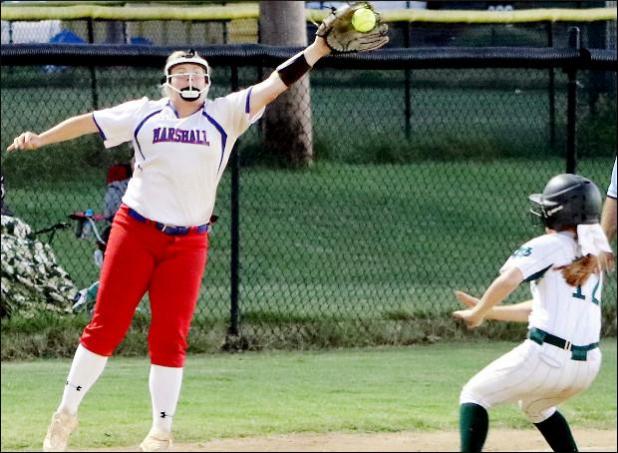 Marshall's Christa Schultz stretches for a throw in the North State title game versus North Delta.

It was total domination by Marshall Academy in the North 3A Fast-Pitch Tournament at Batesville.

“We played great,” head coach Carlton Gibson said. “We made adjustments (at the plate) when we needed to.

“Our pitchers pitched as well as they have all year.

“Hopefully this will carry over to the state tournament.” Those Tuesday routs followed 12-0 and 11-0 wins earlier in the tourney. That’s 43-0 in the four games combined.

MA opened competition in the Class 3A State Tournament at the Magee Sports Complex this past Saturday. The event continued on Monday, Oct. 5. The two finalists will meet later this week in a best-of-three series for the state crown.

Marshall-Winona Against Winona Christian at North State last week, the Lady Patriots exploded for 15 hits. Landry Loper, Tyler Vannucci and Kylie Gurley led the way with three each. Carlie Vannucci had two hits. Getting one hit each and two runs-batted-in were Rayne Rippee, Christa Schultz and Anna Lauren Bain. Zoey Rippee also had a hit. Gurley, R. Rippee, Schultz and T. Vannucci each connected for a double. C. Vannucci had a couple of stolen bases.

C. Vannucci threw seven innings for the win. She gave up three hits, struck out seven and walked none.

MA-North Delta District rival North Delta, the host school for the North State Tournament, proved to be no match for Marshall in the finals September 29. Hallie Turner tossed a two-hitter, and the MA offense stayed hot with eight hits. Turner also struck out nine and walked none. Turner supported her masterful work from the circle with two hits and four RBIs from the batter’s box.

Adding two hits and three RBIs each were C. Vannucci and R. Rippee. Schultz and Z. Rippee each had a hit.

MA scored two in the first, four in the second, five in the third and one in the fourth to end the title match-up early and celebrated with the first-place trophy.

It was the Lady Patriots’ second straight North State championship and their second consecutive year to not allow a run in the tourney.