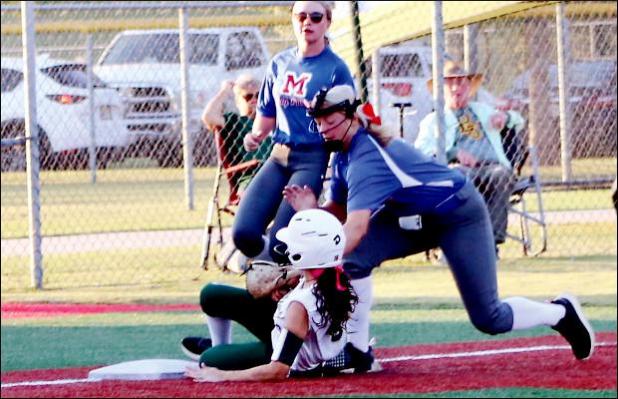 Photos by Angie Bain
Rayne Rippee of Marshall Academy applies the tag to a Bowling Green baserunner Monday. Backing up the play is Zoey Rippee.

The Marshall Academy Lady Patriots are two wins away from a state championship.

MA, playing at the Magee Sports Complex Monday, knocked off Bowling Green School (La.) 6-2 to reach the 3A title series versus Clinton Christian. Game one will be played Wednesday of this week at 6 p.m. At Marshall. Games two and three (if needed) will move to Clinton later in the week.

“I’m super proud of them,” head coach Carlton Gibson said. “Hopefully, we will be ready for Clinton Christian on Wednesday.”

The Lady Patriots took a 1-0 lead over Bowling Green in the bottom of the second. Hallie Turner tripled, and Kylie Gurley got her home with a bunt.

They scored three more in the third. Tyler Vannucci singled and Anna Lauren Bain followed with a sacrifice bunt. Carlie Vannucci and Rayne Rippee each singled to load the bases. Turner came through with a hit to center field, driving in the game’s last two runs.

“We answered right after they scored their runs, and that was big,” Gibson said.

MA had 10 hits. Carrying the hottest bat was R. Rippee, who had three hits. Getting two hits apiece were C. Vannucci and Turner. Adding one hit each were Schultz, T. Vannucci and Bain. The Lady Pats left seven runners on base.in two runs. Then Christa Schultz connected for a hit and drove in a run.

Bowling Green cut its deficit to 4-2 with a two-run homer in the top of the sixth.

In the bottom of that inning, C. Vannucci came through in the clutch with a double, driving in the game’s last two runs.

MA had 10 hits. Carrying the hottest bat was R. Rippee, who had three hits. Getting two hits apiece were C. Vannucci and Turner. Adding one hit each were Schultz, T. Vannucci and Bain. The Lady Pats left seven runners on base.

C. Vannucci earned the pitching victory. She gave up three hits, struck out one and walked none.

“Carlie pitched really, really well,” Gibson said. “She stepped up when we needed her the most.”

It took a little while for the Lady Patriots to get going, but they picked up a 7-0 win over Canton Academy Saturday in their first game of the state tournament.

MA got on the scoreboard with two runs in the bottom of the third and then tacked on one in the fourth and four in the sixth.

Zoey Rippee added a hit and two runs-batted-in. Schultz also had a hit in the victory.

Landry Loper, R. Rippee and Turner each drove in one run

C. Vannucci went the distance for the win from the circle. In seven innings of work, she gave up four hits, struck out six and walked two.

The MA offense was red hot, connecting for 10 hits.

Gurley and T. Vannucci each had two hits and two RBIs in the round-two victory. C. Vannucci also had a pair of hits.

Bain had a big double and three RBIs in the fourth. She drove in four runs in the game.

Turner and Schultz added one hit each, with Turner also picking up an RBI. R. Rippee had a pair of RBIs.

Turner earned the pitching win. In a five innings from the circle, she gave up three hits, struck out three and walked one.

Marshall was on the short end of a 6-2 score versus Clinton Christian in the finals of the winners’ bracket Mon day at the Magee Sports Com plex.

The Lady Patriots gave up three innings in the top of the first and three in the fifth. They tried to scratch back, getting one run of their own in the bottom of the six and another in the seventh.

Schultz led Marshall with two doubles. C. Vannucci had a double, and Z. Rippee also had a hit.

Turner started in the circle and pitched two-thirds of an inning. She struck out one and walked three, and gave up two hits and three runs.

The Lady Pats then rebounded to down Bowling Green and reach the championship series.