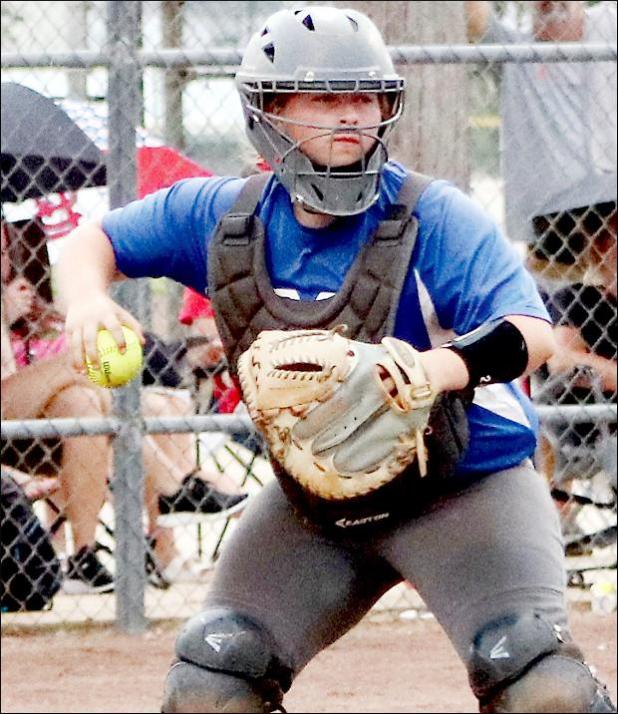 Photo by Angie Bain
MA catcher Tyler Vannucci looks to make a throw to first base.

The Marshall Academy softball team crushed its lone District 1-3A foe last week and then went 1-2 at the Brookhaven Tournament.

Postseason play is near. The North State Tournament is slated to begin Saturday, Sept. 26.

“Our pitching is improving,” coach Carlton Gibson said. “We still need discipline at the plate.

“Hopefully, we will pull everything together for the post-season. We have as much talent on this team as any in the state. I’m looking forward to seeing how far we can go.”

On Tuesday of last week, the MA girls produced an eight-run second inning en route to a 16-3 district rout of Kirk Academy in Grenada.

The Lady Patriots erupted for 13 hits. Getting two each were Carlie Vannucci, Rayne Rippee and Christa Schultz. Schultz had a team-best three runs-batted-in.

Evelyn Greer and R. Rippee each had a triple. Getting a double apiece were Anna Lauren Bain, Charlie Johnson, Schultz, Kamdyn Taylor and C. Vannucci. Hallie Turner and Kylie Gurley each drove in a pair of runs.

C. Vannucci got the pitching victory in four innings of work. She gave up two hits, struck out six and walked five.

Marshall began the Brookhaven Tournament last Saturday with a 6-0 loss to Copiah Academy.

The Lady Pats got just three hits — one each from C. Vannucci, R. Rippee and Bain.

Copiah scored two in the second, one in the third and three in the fifth.

Turner took the pitching loss. She gave up seven hits, struck out six and walked four.

In the second game of the tourney, Silliman Institute (La.) and MA hooked up in a pitcher’s duel with the Lady Pats falling 2-0.

Marshall could come up with only two hits — one each from C. Vannucci and R. Rippee.

C. Vannucci pitched for Marshall in the loss. She gave up only three hits, struck out one and walked two.

The MA girls then finished the tournament strongly as they turned back Hillcrest Christian School 5-2.

The bats got hot in this one. MA had 11 hits, led by C. Vannucci and R. Rippee with two each. One of C. Vannucci’s was a double. Hillcrest scored two in the

top of the first but the Lady Patriots answered with four in the bottom. Marshall picked up another run in the second.

C. Vannucci threw two innings for the win — giving up two hits, striking out three and walking one. Turner threw two innings. She gave up no hits, fanned four and walked one. The Lady Patriots, 19-7 over-

all and 5-0 in the district, faced Lee Academy on Monday of this week to conclude district play. They hosted Starkville Academy Tuesday. They welcome rival Magnolia Heights to town Wednesday of this week.