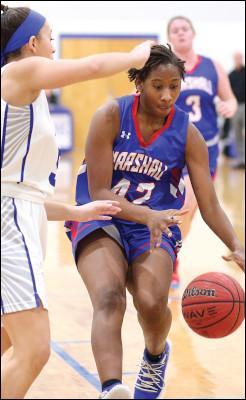 Kailyn Smith of the MA Lady Patriots drives in the lane, trying to get around a Tishomingo County Lady Brave.

The first round of facing District 1-3A opponents went perfectly for the Marshall Academy Patriots.

MA survived a doubleovertime thriller Tuesday of last week, winning 72-67 over Lee Academy. It completed a 40 run versus district opponents, who they will face one more time in the regular season prior to tournament time.

The Patriots let a big lead slip away at home versus the Colts. They were up 42-26 at halftime but went stagnant in the second half.

The Colts rallied to send the game to overtime, and after the second extra period Marshall was able to celebrate the five-point victory.

The Patriots pulled off the victory despite struggling bigtime from the free-throw stripe in the fourth quarter and the two overtimes. They hit just 12 of 29.

Leading scorers for MA were Sam Greer with 20 points, Philip Parks with 14, Jordan Bonds with 12 and Rusty Bolden with 10.

The Marshall boys made the one-and-a-half-hour ride to face Class 4A public school Tishomingo County Thursday and dropped a 64-55 decision to the Braves.

The Patriots almost rallied from a 40-18 halftime hole.

They outscored the Braves 29-10 in the third, cutting the deficit to 50-47 but couldn't complete the comeback in the fourth.

Jeremiah Jones was the top scorer for MA. He had 21, with 17 of those coming in the second half. Greer scored 15, with 13 in the third, and Parks added 10 points.

In the fourth, the Patriots hit 12 of 19 free-throw tries in the fourth to pull away for the 14-point win. Bolden nailed five of six, Greer four of four and Jones three of five.

Parks, driving successfully though the lane most of the night, finished with a gamehigh 25 points. Others in double figures were Bolden with 18, Greer with 16 and Jones with 14.

The MA girls trailed by 20 at the half to Lee Tuesday of last week but kept battling and lost 61-45.

Karah Nicholson had a huge night for the Lady Patriots. She scored 26 points, 16 of those in the second half.

Marshall trailed 37-17 at intermission but outscored the Lady Colts 14-7 in the third to slice its deficit to 13.

Nicholson drilled a couple of threes in the fourth as the Lady Pats would not go away. They ended up losing by 16.

The Marshall girls gave a strong effort Thursday night versus Class 4A public school Tishomingo County on the road and lost 59-38.

The ranked Lady Braves had beaten MA by 42 points earlier in the season. This time the difference was 21.

Nicholson led Marshall with 11 points. Kailyn Smith and Gurley followed with eight each.

The Lady Patriots got a huge steal and bucket in the closing seconds from X'Zorria Jones to seal a 40-37 win over Columbus Christian Friday night at home.

The game was tight throughout. MA led 7-6 at the end of the first, and then the contest was knotted at 21 at halftime. MA was up 30-29 entering the fourth.

Hallie Turner, who had a game-high 17 points, hit five threes in the game. Her longrange shot in the fourth added to the Lady Pats' momentum.

Then with the Lady Rams playing for the possible gamewinning shot as the clock winded down, Jones came up with the biggest play of the night. She finished with nine points.

The Patriots (12-9) visited Macon Road (Tenn.) Tuesday for a district contest. Both the Pats and Lady Pats (7-17 overall and 0-4 in the district) travel to Lee Academy Thursday and then host Kirk Academy Friday. Next Monday, Jan. 27, they host North Delta for their final home games of the season. All are district contests.