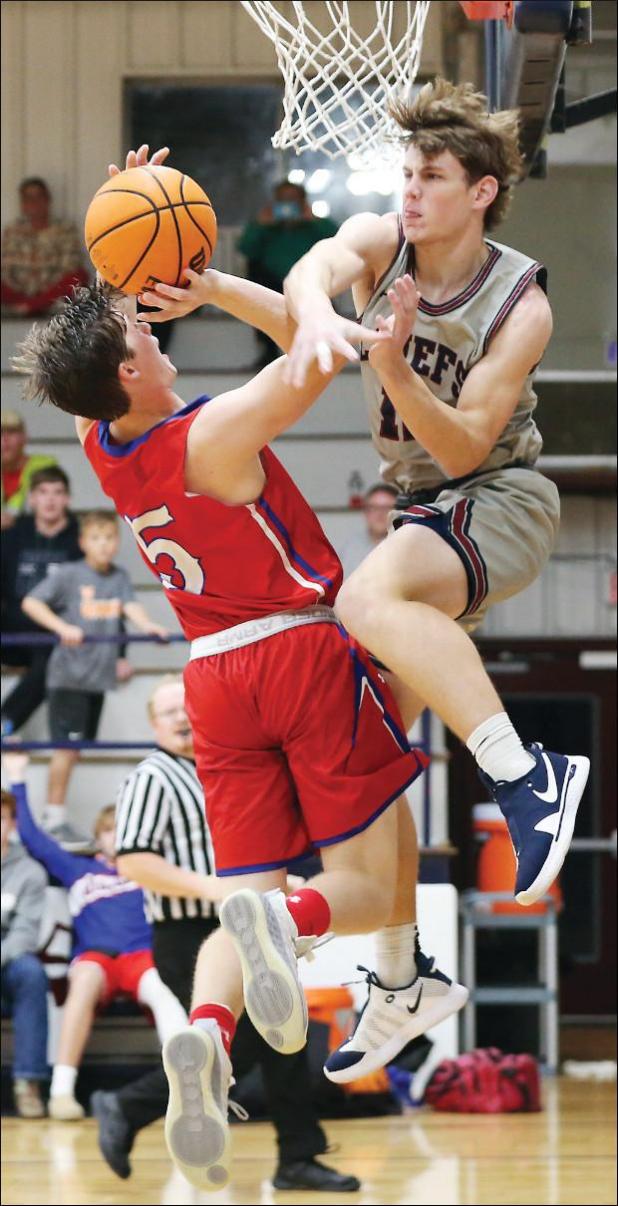 Photo by Theresa Bolden Devore
MA's Walker Sanders (5) goes up for a shot versus the Chiefs.

Patriots win by 20 over Stars; lose to Chiefs

A big night from Dee Howell lifted the Marshall Academy Patriots to a road win over Winona Christian last week.

Howell cashed in nine in the first Thursday as the Patriots grabbed a 16-4 advantage and then had 11 in the fourth as they tucked away the 20-point win.

Jordan Bonds also scored in double digits. He had 10. Howell and Bonds hit a pair of three-point shots each. The third quarter was the difference in the Lady Patriots’ game at Winona as they lost 57-36.

MA was down by just three, 24-21, at halftime, but the Lady Stars tallied 23 points in the third to just four for the Lady Patriots.

Karah Nicholson led the Marshall offense with 15 points, nine of those coming in the first quarter on three threes.

Bella Roberts poured in 26 for Winona Christian, half of those coming in the third.

“We failed to help on driving situations a lot,” coach Jeremy Ervin said. “They got by our initial defender, and we had no help.

“They hurt us on the pick and roll.”

The 3A Patriots struggled in the first half and lost 68-40 to 5A rival Magnolia Heights Friday night in Senatobia.

MA could muster just 14 points in the opening 16 minutes of the game, while the Chiefs tallied 38.

The two teams pretty much swapped buckets in the second half as the Pats went on to lose by 28.

The Lady Patriots played without one injured starter, Karah Nicholson, and fell 55-34 to the Lady Chiefs, a team they had beaten earlier in the season at home.

Marshall struggled to score, particularly in the second and third quarters.

“With Karah out, we knew it would be a little more difficult to generate points,” Coach Ervin said. “We filled in for her by committee, and everyone did a fine job. We just couldn’t get shots to fall.”

He said his team had too many turnovers.

“We were a little sloppy handling the ball, which led to some costly turnovers that Magnolia Heights converted into points,” Ervin said.

“Defensively, the effort and energy were there, but we fell asleep a few times on our helpside defense which led to us getting beat on lob passes and easy buckets for them.”

Kylie Gurley was MA’s top scorer with 14 points, seven in each half.

The Lady Patriots (6-4) and Patriots (4-7) will not play again until after the Christmas-New Year’s break.

The schedule will resume on Tuesday, Jan. 5, when the MA teams host Kirk Academy.