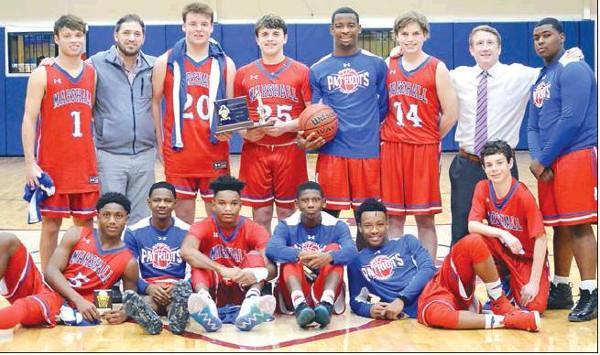 The holidays were happy for the Marshall Academy Patriots.

“It was a tough task against three quality opponents but the guys were up to it,” he said. “I’m proud of the way they defended and played selfless basketball on the offensive end.”

After knocking off Greenville Christian in round one, the Patriots had the tall task of facing the Chiefs on their home court in the semi-finals December 28. They rallied for a 61-59 win.

“I think the turning point in the tournament was climbing back from a seven-point deficit in the fourth quarter against Magnolia Heights at their place, in their own tournament,” Ervin said.

Leading the Patriots were Philip Parks with 20 points, Jeremiah Jones with 16 and Sam Greer with 10.

Ervin’s team outscored the Mustangs 23-10 in the second quarter to take a 36-21 halftime advantage.

“We were able to ride the momentum (of the win over Magnolia Heights) into the finals and play great basketball versus Strayhorn,” he said. “I hope the boys like the feeling of winning and are willing to do the necessary things to keep on winning.”

The Patriots improved to 10-2 on the season.

Top scorers in the victory over Strayhorn were J. Jones with 20, Parks with 14 and Everette Jones with 11.

Parks and Greer were named to the all-tournament team.

After a one-point loss to Greenville Christian in round one of the Classic, the Lady Patriots fell by three to Magnolia Heights the next day and then beat Magnolia Heights “B” by 15 on the third day of the event.

The MA girls dug themselves an early hole versus the Lady Chiefs on December 28 and couldn’t quite rally, falling 43-40.

The Lady Pats were down 12-2 at the end of the first and fell behind by as many as 13 in the second quarter. Then Keranie Jones hit a three, and at the close of the half, Kaylan Parks cashed in three straight lay-ups. Marshall was down 29-21.

MA sliced the deficit to four (34-30) at the end of the third and couldn’t quite get over the hump in the fourth, falling by three.

Parks scored 20 in the loss.

The Lady Patriots, led by offensive sparks from Peyton Stephenson and Parks, bounced back for a 43-28 win December 29 over Magnolia Heights “B.”

The lead was 27-14 at the half. Parks opened the second half with five straight points.MA was up 38-22 after three quarters and coasted in the fourth.

The Lady Patriots’ record went to 4-9.

Parks was named to the alltournament team.

“I’m proud of the way my girls played over the holidays,” Ervin said. “We were a couple of breaks away from being 3-0 but had to settle for 1-2.

“The thing that makes me most proud is that not catching the breaks didn’t affect the way they played. I keep telling them if they continue to play the right way, good things will happen. I believe that. As long as we keep our heads up and keep grinding, we’ll be a tough game for anybody on down the line.”