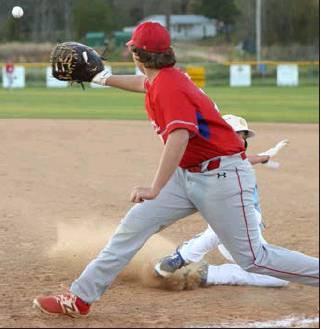 Photo by Theresa Bolden Devore
Jordan Bonds reaches for the baseball as a Winona Christian player tries to get back to first safely.

“I really don’t know what to say right now,” said Branch, after celebrating with his players. “There’s no quit in us. We just keep believing. We compete until the last out, and that’s what it’s all about.”

There were lots of heroes for the Patriots in the crucial 10-9 District 1-AA victory.

But atop the list were Jack Whaley Smith and Darian Houston.

Smith had a clutch, two-out hit in the bottom of the seventh that scored two runs and tied the game at 8, sending it to extras.

Winona grabbed the lead back, 9-8, in its half of the eighth.

Then in the bottom of the eighth, with the game tied at 9 and one out, Houston had the game-winning hit.

“It was a group effort,” Branch said.

The Patriots trailed 5-2 after four innings. They scored four in the bottom of the fifth to go up 6-5. The Stars responded with three in the sixth and led 8-6 prior to MA’s successful rally efforts in the final two innings.

Winona had 14 hits and Marshall 10. Each team committed four errors.

Getting two hits each for the Patriots were Rusty Bolden, Houston and Brayden Daughtry. Adding one hit and two RBIs each were Wyle McMillen and Smith. Colton Neal had a hit and RBI, as did Jordan Bonds.

“It was a great job by this team,” Branch said. “We have to just keep working.”

The Patriots dug out of a deep hole Tuesday, March 19, at Winona Christian but came up short, 12-9.

It was tied at 9 going to the bottom of the sixth, when the Stars scored three to get the victory.

The two teams combined for 24 hits – 13 for Winona Christian and 11 for Marshall.

Carrying the hottest bats for MA were Neal, who had three hits, and Smith, who had two hits, three stolen bases and two RBIs.

Houston and Daughtry each had one hit and two RBIs.

Also picking up one hit each were Bolden, McCarter, McMillen and Bonds.

McCarter pitched one and two-thirds innings. He gave up seven hits, struck out one and walked three. Bolden threw four and one-third, giving up six hits, striking out six and walking two.

It was an 11-hit day for Marshall. Bolden led the way with three hits. Houston, McMillan and Bonds each had two hits. Adding one each were Mc-Carter and Neal. Bonds and Neal each had two RBIs.

MA surged ahead 8-0 after two innings.

Daughtry threw four innings to get the win. He struck out six and gave up three hits. He was relieved for one inning by Mason Moore, who gave up two hits.

The annual event pays tribute to Tracy Rodgers, a former student athlete who attended MA from 1969-1979. He was killed during his junior year (October 1979) in a tragic car accident.The tournament also pays tribute to Lane Rodgers, a 10-year-old avid baseball player who was killed in June 2015 when a tree limb fell on him while leaving the baseball field in Tupelo.