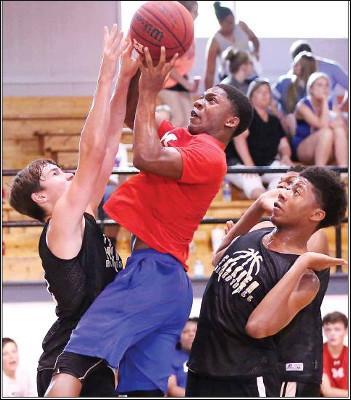 Photo by Theresa Bolden Devore
Philip Parks of Marshall puts up a shot in the middle of some Falkner players during summer action.

If team camp this summer is any indication, the Marshall Academy Patriots will once again be a force to be reckoned with on the basketball court in 2019-2020.

“We will be smaller and will have to perhaps score in different ways, but I don’t see that being a problem,” he said.

“We had a good week at camp, including a win over 6A public school D’Iberville and a split with 4A Tishomingo County. And we held our own against MRA.”

“We will certainly miss those guys who contributed so much to our success,” Ervin said. “But we have some guys who can step in. I am happy with what we have back from an offensive standpoint.”

Key returnees include leading scorer Philip Parks, who had several 20-pluspoint games last season, and floor leaders Sam Greer and Jeremiah Jones. Another senior-to-be who will step into a key role is Anthony Mayfield.

“Anthony does a good job of getting offensive rebounds and putting the basketball back in the hole,” Ervin said. “He takes advantage of his opportunities.”

Also getting some important minutes, he said, and contributing at MRA camp were Rod’Drickas Moore and Bo Martin.

“I thought the camp went really well,” he said.

The Patriots returned to the court for some practice sessions after the Fourth of July week.

“It will largely be work on fundamentals – shooting, ballhandling and defensive drills,” Ervin said.

The Patriots, who won the District 1-AA crown last season, will go against different district foes this time around, in District 1-3A. They include Kirk Academy, North Delta School, Lee Academy (Clarksdale) and Macon Road (Tenn.), all familiar foes with the exception of Macon Road, new to the Mississippi Association of Independent Schools.

“The new district will be a strong one,” he said. “We were the favorites last year, and honestly, we could be the favorite again this year.

“Kirk will be solid. The new district will be tougher night in and night out.

“We’re looking forward to it. It will be fun. It’s like we’re playing old friends.”

Ervin, who will be in his second season at the helm of the Patriots, is finalizing the schedule. He said both MA teams will play Greenville Christian at Mississippi Valley State University. Plus, he has added home and away contests versus Tishomingo County, led by former MA coach Craig Dailey, and Bayou Academy, where Ervin coached prior to coming to Marshall.