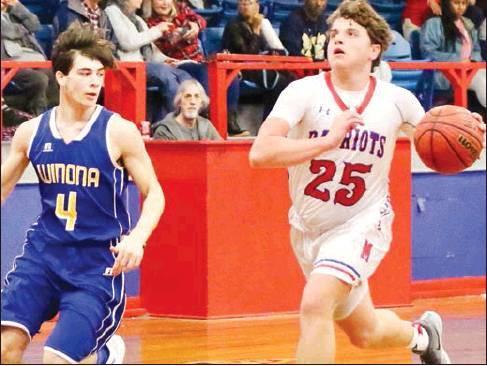 Patriots get pair of district victories

The Marshall Academy Patriots scorched a pair of district foes last week, one at home and one on the road.

Winona Christian proved to be no match for MA on Tuesday, Jan. 8, at home as they recorded the 61-38 win.

They outscored the Stars 24-4 in the second period.

Philip Parks cashed in backto-back buckets early in the second. Then Drayton Potts nailed a three to make it 26-5, and the rout was on.

The halftime score was 42-9 and because of the wide margin, the clock ran nonstop starting early in the third.

MA, with everyone getting some playing time, won by 23.

Parks was the leading point producer with 23, and 21 of those came in the first half. Zach Sorrell scored 12.

The Patriots got off to a slow start Friday at Central Holmes but ended in high gear, trouncing the Trojans 71-39 in District 1-AA action.

Marshall was zero for six from the free-throw stripe in the early going and didn’t score until the 4:13 mark of the first. Jeremiah Jones’ three put the visiting squad up 3-2.

Parks ended the opening period with a bucket, and the lead had ballooned to 20-6.

Parks finished with 22 points, followed by Sorrell with 15 and J. Jones with 11.

The Marshall Lady Patriots let a first-quarter lead slip away and dropped a close one, 46-41, to Winona Christian.

The Lady Stars snatched their first lead at the 1:55 mark of the second.

Lomenick then opened the third with a three and the lead was six.

At the 2:34 mark of the third, with the Lady Patriots now trailing 31-29, Parks picked up her fourth foul.

The Stars were up 35-29 at the conclusion of the third.

Winona led by as many as 10 in the fourth. But Marshall didn’t quit.

Parks cut the deficit to three (44-41) in the final minute but the Stars hung on to win by five.

The MA girls kept it close the first half against the best team in the district, Central Holmes, but ended up losing 73-36.

The Lady Pats fell behind 12-2 with 1:42 left in the first. However, Peyton Stephenson’s three cut the deficit to 12-7 at the end of the quarter.

They were down by as many as 12 in the second but kept battling. Parks scored 10 straight points to conclude the half and MA was within three, 28-25.

Stephenson’s shot sliced the deficit to one to start the third but then the tide turned in favor of the Lady Trojans the rest of the way.

Central Holmes surged ahead 51-36 at the end of the third and added to that advantage in the fourth.