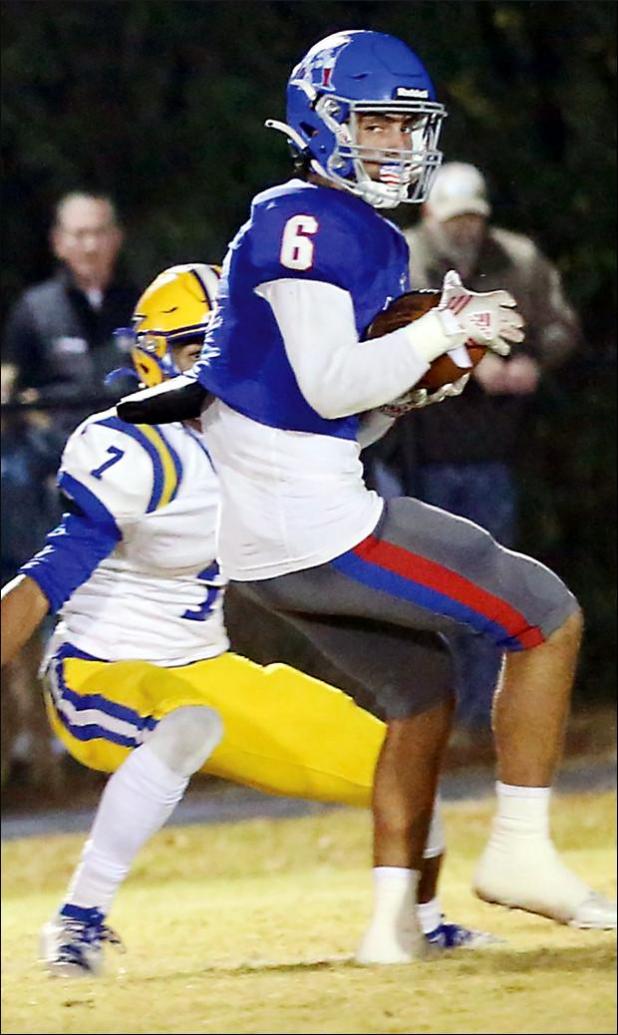 Winona Christian School left Marshall Academy with a playoff win Friday night but the visitors also departed knowing they’d been in a battle.

The game wasn’t decided until the fourth quarter.

Trailing 28-21, the Patriots squandered a couple of scoring opportunities and ended up falling 35-21 to the Stars in the second round of Class 3A post-season competition.

“I was pleased as can be with the way we played,” head coach Tony Banks said. “We were aggressive; we hit folks; we were physical. And we were a play or two away from winning that game.” He said Junior Graham, head coach of the Stars, called him the morning after and said, “That’s the most physical game we’ve been in all year.”

Winona Christian, on the first play of the game, got a 43-yard burst from Blake Cooper to the Marshall 12. Four plays later quarterback John White scored on a 3-yard keeper. Steele Mims cashed in the kick.

The Patriots answered with a 65-yard, 15-play scoring drive that ran nine minutes off the clock.

“We wanted to stay ahead of the chains; no plays with negative yards,” Banks said. “We wanted to put together drives and keep the ball out of their hands.”

A 10-yard pass from Landon Houston to Rusty Bolden pushed the ball into Winona territory. Ethan Helton and Colton Neal had a pair of firstdown runs before Houston carried 4 yards for the touchdown. Keaton Morgan kicked the extra point. It was 7-7 late in the first quarter.

After getting the ball back, the next big gainer for Winona Christian resulted in points. White threw to Scott Walters for a 49-yard touchdown. Mims’ kick was good. It was 21-7.

Bolden returned the ensuing kickoff 35 yards to the Stars’ 40. A Houston to Bolden pass play gained 13 yards, and then Neal carried 13 more yards to the 14.

On a second and 16 from the 20, Houston threw the ball into the endzone for Bolden, who made a leaping grab over a defender for the six points. The extra-point try failed. Marshall was down 21-13, and that score held until halftime.

On their second possession of the second half, the Patriots put together a 61yard 12-play drive to knot the game. Helton, running behind fullback Nic Henry and the offensive line, did most of the damage out of the backfield. He carried six times, including 7 yards for the touchdown. Houston kept for the two-point conversion. It was 21-21 with 2:15 to go in the third.

However, the Stars struck back quickly. On third and 6 from their own 40, White threw another deep ball, this one to Jake Ware for a 60-yard score. Mims’ kick put the visitors up 28-21 with a less than a minute left in the third.

The teams swapped punts. The Stars’ punt came after Henry sacked the quarterback for a 16-yard loss.

With just over four minutes to go in the fourth, MA reached the Winona Christian 23, lost 3 yards, and then couldn’t convert on a fourthand-10 try.

Marshall got the ball back with 1:32 left. On third and long, Winona Christian’s Lane Beckwith picked off a pass and returned it 40 yards for the game-clinching touchdown. Mims added his fifth extra point of the night.

Just three weeks earlier, the Stars had defeated the Patriots 33-7 in a regular season game at Winona.

“We really cut down on the mistakes in this game,” Banks said. “We knew going in that we had to try to take away Wiggins and Cooper, and for the most part, we did that. But Winona still hit us with some big plays against our man-to-man coverage. They had to find another way to beat us.”

The Stars move on to face Greenville Christian School in the state semi-finals. Marshall finished 6-5.

“I’m proud of our kids,” Banks said. “It’s always a learning curve with a new coach. It was a disappointing loss Friday, but I hope our eight seniors realize they were part of building a base to move forward.

“We won our conference and were one of the final eight teams playing. That’s a good year.” It was Marshall Academy’s 14th straight playoff appearance.