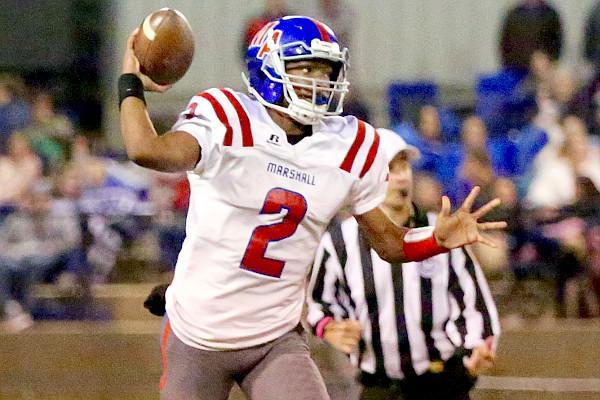 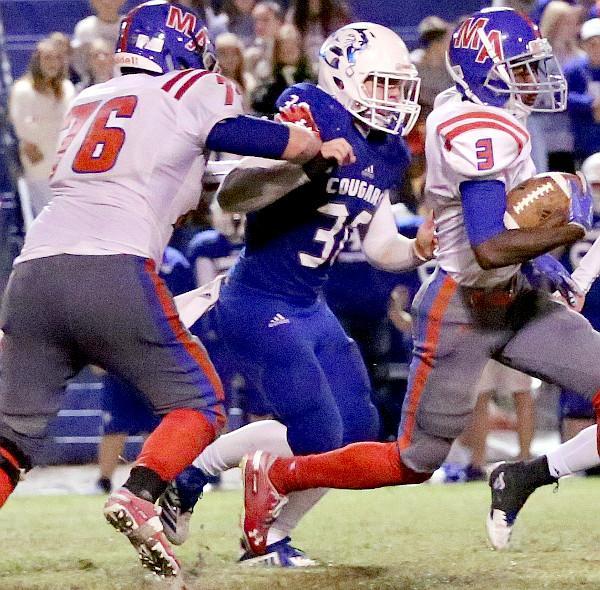 Patriots fall in opening round

Marshall Academy led for less than a minute in the first quarter Friday night.

Then a couple of plays swung the momentum and the Patriots never recovered – losing 48-13 at Brookhaven Academy in round one of the Class AA state playoffs.

Switching to offense, on third and 4, he found running room provided by the offensive line and sprinted 64 yards for a touchdown. Jason McDoniel made the kick for a 7-0 MA lead with 10:09 on the first-period clock.

Brookhaven quickly an­swered on a second-and-12 play. A senior combination of Dawson Flowers to Cade Brown struck for a 67-yard score with 9:14 left in the first. Sean Beard nailed the first of his seven extra points. It was 7-7.

The Patriots fumbled the ball away on first down.

Brookhaven struck again in just one play. Brown dashed around right end for a 62-yard carry to the end zone.

The Cougars had a lead they never relinquished.

“They got deep on us for that touchdown and then we gave the ball right back to them, and they scored again,” coach Barrett Donahoe said.

“It was frustrating. Turnovers (five on the night) hurt us.”

The Pats’ next possession ended with an interception.

MA had to punt but Will Hanggi and Davarius Harris made a couple of big plays defensively to stop Brookhaven on its next possession.

The Marshall offense drove from its own 33 to the Cougars’ 37 but couldn’t convert on a fourth and two.

“Down 21-7, we got some first downs and took some time off the clock,” Donahoe said. “If we could have cashed in that possession, maybe the tone of the game would have changed.”

Instead, Brookhaven answered with a 62-yard, seven-play drive to go up 28-7 with 4:48 remaining in the second quarter. Griffin performed the scoring honors from 3 yards away.

The Cougars finished the first-half scoring with a 41-yard field goal by Beard with 2:19 left.

The Patriots showed some grit to start the second half. Reagan White returned the kickoff 19 yards to MA’s 49. A flag on second down pushed them backwards, but then Jeremiah Jones found his brother, E. Jones, open over the middle for a 42-yard gain. On third and goal from the 8, E. Jones, in the wildcat formation, threw to a leaping Sam Greer for the touchdown. The point-after try was blocked. It was 31-13.

“It was good to see us battle back there,” Donahoe said.

Brookhaven’s next possession started with a loss, courtesy of Marshall’s Hanggi, Thomas Stewart and Zach Sorrell. But on the next play, a 15-yard flag on the Patriots pushed the ball to MA’s 34. Griffin ended the possession with a 5-yard touchdown plunge.

The Patriots turned the ball over again, and the Cougars had a short field, 43 yards, on their way back to the end zone. It was Griffin again, his fourth of the night, this time from the 3. The lead was 45-13 late in the third.

Beard nailed another field goal, this one from 28 yards away, with 3:58 left to finish off the point production.

“Brookhaven is a very good football team,” Donahoe said. “The quarterback (Flowers) threw the ball extremely well, and we knew number 19 (Brown) was an exceptional player. Brook­haven shined in the passing game. They made plays all over the field.

“I’m not upset with the way our guys played. Lack of execution, yes, but focusing on the positives, we had good things that several different guys were doing out there. I thought the overall effort was good.”

MA finishes the season at 3-8 overall.

Brookhaven (8-3) moves on to face River Oaks this Friday night at home in the second round of the playoffs.