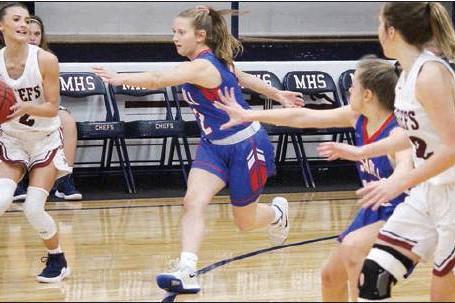 Barnburner is defined as an event, typically a sports contest, that is very exciting or intense. There were a pair of those Tuesday night of last week when Marshall Academy visited rival Magnolia Heights.

The Patriots battled from behind most of the night and used a late surge to stun the Chiefs 60-49.

The Lady Patriots fought back from a 13-point deficit in the second period and had chances to win it down the stretch before falling 54-50.

The MA boys had their difficulties in the early going. They were down 17-6 at the end of the first and trailed 23-12 with 5:30 left in the second.

“I didn’t like the way we came out in the first quarter,” coach Jeremy Ervin said. “We weren’t executing on the offensive end, and there was a lack of intensity on defense. That put us in a hole, and we had to play uphill the rest of the night.”

Then they went on a 14-2 run. Drayton Potts drained a pair of threes, the last one putting the Patriots up 26-25 with 1:06 left until halftime.

The deficit went to eight to start the fourth.

Then Coach Ervin’s squad scored 14 unanswered points to lead 53-47 with 5:07 remaining. Everette Jones had a couple of steals and baskets, and Potts added another big three.

MA cashed in a couple of more buckets off takeaways in the closing minutes and also nailed some free throws to win by 11.

Potts blistered the nets for 18 points, followed by E. Jones with 15 and Philip Parks with

“We got a big lift from Drayton (Potts),” Ervin said. “He had the hot hand so we got him the ball. When he’s on like that, we go to another level. Everette (Jones) had a big game for us as well. When we weren’t calling plays for Drayton, we were getting it to Everette in the mid-post. If he makes his mind up to get to the rack, he’s a load to handle. Plus, his court vision and playmaking abilities make it real tough on the defense to just key in on him.”

In the girls game, Peyton Stephenson kept the Lady Patriots in the game early, scoring all five first-quarter points as they trailed 10-5.

They were down by 13 late in the second.

Kaylan Parks’ putback cut it to eight, and the deficit was six, 24-18, at intermission.

MA then dug out of a ninepoint hole in the third. Erin Lomenick scored on a putback and Hallie Turner followed with a basket to put the Lady Patriots in front, 30-29, with 3:21 left in the quarter.

Marshall’s lead was 35-33 entering the fourth.

The Lady Chiefs broke a 43-43 tie with a three-point shot at the 3:51 mark of the final quarter, and they held on from there to win by four.

Top scorers for MA were Stephenson with 15, Parks with 14 and Lomenick with 11.

“My girls battled strong like they always do,” Ervin said. “We were just a couple of breaks away from getting that one. I’m proud to say they’ve kept their heads up and played hard throughout this stretch. They haven’t felt sorry for themselves. That says a lot about their character.”

The Patriots had what appeared to be a comfortable 36-19 halftime lead.

The Trojans cut it to eight, 45-37, at the end of the third and kept chipping away in the fourth.

MA struggled from the free-throw line in the closing minutes but hung on for the one-point victory.

Jeremiah Jones was the leading scorer with 18. Zach Sorrell added 14. E. Jones and Parks scored 10 each.

The Lady Patriots could never get on track versus Central Holmes, the number one team in the district, and fell 57-18.

Stephenson and Turner had five points each for MA.

It took the Patriots a little while to get on track Friday night at Carroll Academy, but when they did, it was no contest. MA routed the Rebels 78-36 in district action.

Marshall had just a fourpoint lead after one quarter. Near the two-minute mark of the second, Parks scored on back-to-back breakaways and it was 30-18.

The Patriots were on cruise control in the second half and won by 42.

The Lady Patriots looked to end an eight-game losing streak and came oh, so close. They fell 41-39.

“We’re losing a lot of extremely close ball games, and we’re due a break,” Ervin said. “Despite the (district) standings, we’re a team nobody can afford to overlook in the postseason.”

The MA girls led Carroll by as many as seven in the first after a pair of Stephenson threes and were up 10-8 at the end of the period.

The Lady Patriots were up by as many as four in the fourth but let it slip away. The Lady Rebels nailed a pair of free throws in the closing seconds and won by two.

Stephenson had a big night with 18 points, including four threes and four of four from the free-throw stripe. Parks had 16.