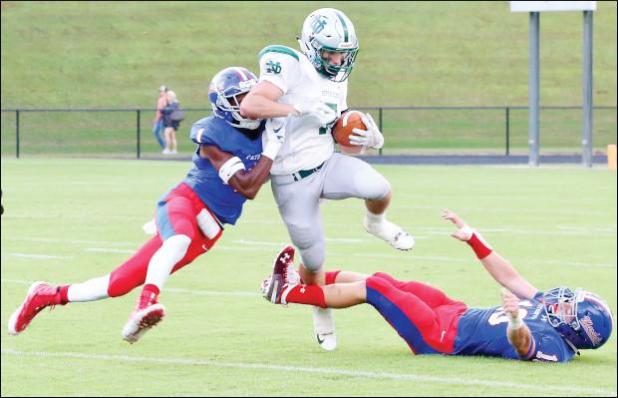 Head coach Barrett Donahoe asked his team after the game Friday night, “How many of you believe you can be better?” All the Marshall Academy Patriots raised their hands.

MA, playing at home on Heath Barnett Field, had just dropped game one of the season, 41-12, to North Delta.

“Their attitudes were very positive,” Donahoe said. “I was excited about that. If they have the desire to be better, we can have success as the season progresses.” The Patriots had a good chance to get on the scoreboard first. Jordan Bonds’ onside kick to open the game was successful as teammate Rusty Bolden recovered the football at the North Delta 43.

On the first play, a leaping Philip Parks caught a 25-yard pass from Jeremiah Jones, pushing the ball to the 18.

MA moved to the 12 before losing yardage and having to give up the football. North Delta then used nine consecutive running plays to drive 84 yards for a score. Jimmy Manues reached the end zone on a 1-yard plunge. Layton Wells kicked the extra point.

“North Delta is big up front,” Donahoe said. “They run the ball well, and they executed well. Their quarterback is really good, and they have a lot of good athletes. We faced a really good opponent in the first game of the season.”

The Patriots drove into Green Wave territory on their second possession but a block-in-the-back penalty proved costly.

They could not convert on a fourth and six.

North Delta responded by driving 73 yards for more points. Ryan Gibson threw to Jordan Cox for the 11-yard touchdown. Wells’ kick made it 14-0 with :09 left in the opening quarter.

A bad snap from Marshall put the Green Wave in business at the MA 28.

On first down, Gibson scrambled under pressure and found Drake Barton for a 28-yard touchdown pass. Wells was good on the kick.

The Green Wave would score twice more in the second quarter to take a 33-0 halftime advantage.

Cox kept the ball for an 11-yard score, and with 1:05 left in the first half, he threw deep to Barton for a 44-yard touchdown.

The Patriots began the second half by driving 31 yards to the North Delta 18. But an interception stopped the march.

After the Marshall defense forced a punt, the offense traveled 66 yards in just five plays to get on the scoreboard. Jones had a pair of completions, the first for 11 yards to Parks and the other for 45 yards to Sam Greer for a touchdown. Greer leaped for the catch and then turned down the sideline for the score. The try-for-two failed with 5:05 to go in the third.

North Delta responded with its final touchdown of the night. Manues ran for a couple of first downs. Gibson kept for the touchdown from 8 yards out. Cox carried for the twopoint conversion. It was 41-6.

“We’re playing with a lot of young guys on defense who have no varsity football experience,” Donahoe said.

“Offensively, we did not take advantage of some opportunities.

“We just didn’t play well at times, but I thought we fought hard. I saw flashes of what we can be.”

Jones was four of 15 passing for 95 yards and he ran the football nine times for 59 yards. Anthony Mayfield carried eight times for 40 yards and Colton Neal seven times for 32.

Top tacklers were Rod Moore with five and Sam Greer and Jack Whaley Smith with four each.

The Patriots have an off week. They will next face Myrtle at New Albany on Friday night, Sept. 6.

“We took our lumps against North Delta, which is a really good team, and we just have to go to practice and work on getting better.”