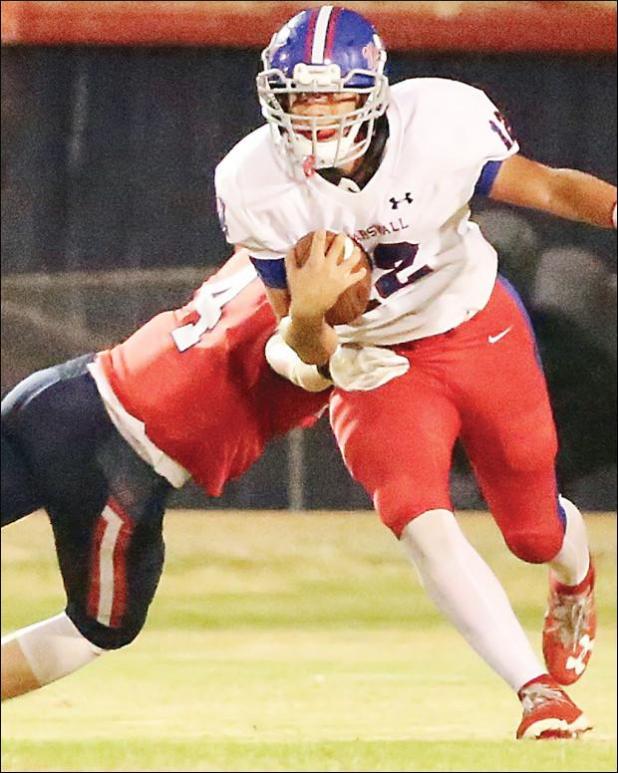 Photo by Theresa Bolden Devore
Marshall’s Landon Houston (12) tries to escape the grasp of a Kirk player for extra yardage.

One play stands out in the Marshall Academy versus Kirk game Friday night.

However, coach Barrett Donahoe said the 28-22 loss cannot be pinned on the Patriots’ fourth-quarter turnover that led to the Raiders’ gamewinning score.

“We had the opportunity to win the football game,” he said. “The fumble happened at a very inappropriate time, but this game is not all about the fumble. There were a lot of things in that game that we did not do well, and we have to find a way to fix those things. We didn’t play well enough to win.”

Leading 22-20 with less than three minutes to go, MA faced a fourth and less than a yard near the Kirk 24.

The Raiders not only held but jarred the ball loose, picked it up and ran it back to the Patriots’ 16.

“We had a timing issue on the play, and their middle linebacker read it and made a really good play at a big time in the game,” Donahoe said. “Then one of their players was in the right place at the right time to be able to pick it up and go. For us, Anthony (Mayfield) and Jeremiah (Jones) stayed with it and were able to run him down.

“Then I think our guys were shell-shocked, and we were not able to keep them out of the end zone.”

The Raiders scored on a 10-yard run, and they added the two-point conversion with 1:15 remaining to go up by six.

The Patriots, with no timeouts, didn’t throw in the towel. Landon Houston, in at quarterback with an injury to Jones, threw deep to Rusty Bolden, who made a leaping catch over a Raider defender. The play picked up 31 yards to the Kirk

35. On the last play of the game, Houston launched another deep throw, this one for Philip Parks, who almost made the snag with two Raiders on the coverage.

“Our effort was just not there consistently the entire night,” Donahoe said.

On the ensuing kickoff, Parks reeled in the football at his own 13-yard line, dashed up the middle and then cut along the right sideline for an 87-yard return for a touchdown. The try-for-two failed.

The Raiders’ next possession ended with a missed 35-yard field-goal try.

After a Marshall punt, Kirk drove 71 yards for its second touchdown of the night, this one a 12-yard run. A miscue on the snap foiled the extra-point try. The Raiders led 13-6, and that was the score at halftime.

Kirk returned the secondhalf kickoff 67 yards to the Patriot 10. After a flag on the Raiders, they scored from 15 yards out and added the extra point.

The Patriots answered. On first down, Jones and Sam Greer connected for a 44-yard pass play to the Kirk 22. Following a 1-yard loss, Jones kept for 23 yards and six points. Houston ran for the conversion to slice the deficit to 20-14.

Later in the third Bolden recovered the Raiders’ muffed punt at the Kirk 23.

Facing a third and 14, Parks took the pitch, had nowhere to go and reversed field for a 17-yard touchdown run. Jones threw to Mayfield for the twopointer. MA led 22-20 with 3:58 left in the third.

The defenses for both teams stood tall on the next three possessions.

The Patriots took over at their own 24 with 7:45 remaining in the game. They were able to run the clock and pick up a pair of first downs before the turnover with 2:48 left.

“We found a way to get ourselves back in it (after going down 20-6), and I really thought we could take the clock on down there in the fourth quarter, and we were just one first-down short,” Donahoe said.

“The thing is, we have to do a better job of playing well early in games. We have to be a better football team in the first and second quarters.”

Bolden led the defense with seven tackles. Jack Smith had five and a half tackles.

Jones was seven of 11 passing for 100 yards. He and Parks each had 52 yards rushing.

It’s homecoming this week as MA (1-2) opens District 1-3A play versus Rossville Academy (Tenn.). The Wolves are 0-4, coming off a 55-6 loss last week to Clarksdale Lee Academy.