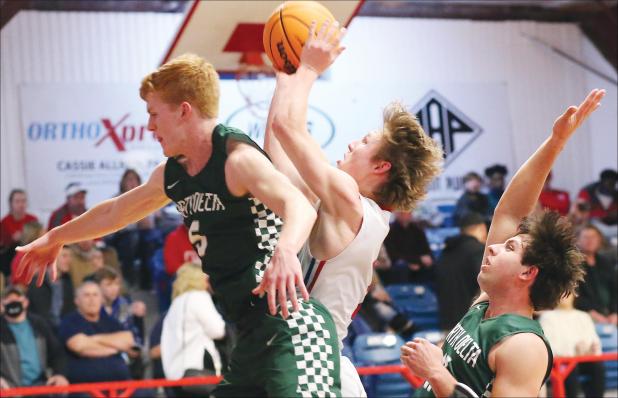 Photo by Theresa Bolden Devore
Rusty Bolden of MA is sandwiched by a couple of North Delta players as he goes to the goal in the title game Saturday at home.

The Marshall Academy Patriots got to hoist their District 1-3A Tournament championship trophy in front of their home fans Saturday evening.

MA withstood a stiff challenge from North Delta School and pulled away for a 65-48 win.

Up next is North State at Kirk Academy in Grenada.

The Lady Patriots are also heading to the North tourney after finishing third in the district. “I’m so proud of my guys and the MA

fan base,” said coach Craig Dailey, in his first season back at the school after tons of success from 2005 to 2015. “This reminds of the `old days.’

“In the age of COVID, it was great to see a championship atmosphere in the MA gym.” Dailey’s squad got off to slow start, trailed 9-2 about three and half minutes into the game.

Jordan Bonds’ bucket from inside the paint tied the game at 24 at the 4:18 mark of the second. About 30 seconds later, Moore hit a three, and MA was up and never trailed again.

Rusty Bolden’s putback made it 33-25 at halftime.

Walker Sanders hit two shots to start the second half, and the lead was 11 points, 37-26.

Dee Howell was five of five from the free-throw stripe in the fourth. MA won by 17.

Scoring in double figures were Howell with 16, Bolden with 15 and Moore with 10.

“Dee struggled early versus their zone,” Dailey said, “but we found a kink in the second half, and my guys exploited it.

“Rusty had a great game. He is steadily improving, becoming a force on both ends of the floor.

“All the guys raised their game, and we have to keep doing that as tournament play continues. We will enjoy this blue trophy and get back to work this week.”

In the consolation contest Saturday on the girls’ side of the bracket, MA dominated early and then held off a challenge from Lee Academy to win 51-37.

“We split with them in the regular season and really felt we should have won the game at their place,” coach Jeremy Ervin said. “Our girls were inspired and played hard.”

He said it was also crucial, for bracket purposes at North State, to snatch the number three spot from the district instead of finishing fourth.

“We won the game on the defensive end,” Ervin said. “I’m proud of them.” The Lady Patriots led by 10 at the half and came out on fire to start. Karah Nicholson and Hallie Turner each nailed pair of threes in the opening 16 minutes and Kylie Gurley also hit a long-range shot.

MA stretched its lead to start the third. A pair of free throws from Kailyn Smith made it 39-20 with 4:15 to go in the quarter.

Smith converted a huge three-point play with a minute remaining. MA then secured the double-digit win by sinking some big free throws.

Smith led the offense with 15 points. Also hitting in double digits were Turner with 12 and Nicholson with 11.

Semi-Finals The MA boys cakewalked to a 71-8 win over Kirk Academy in the district semi-finals Thursday night. Back-to-back buckets from Bonds made it 13-0 with 2:55 to go in the first quarter. The lead was 21-4 at the end of the first.

Moore opened the second with a bucket, and three minutes later Bolden’s three upped the lead to 36-4.

Aaron Pilcher scored six of his 10 points in the second quarter. The Patriots were up 45-4 at halftime.

Gavin Coleman also scored 10, with all of his coming in the second half.

The Marshall girls hit a cold streak at the wrong time in their semi-final contest versus Kirk and lost 48-30.

MA could not bounce back in the fourth. The host team was outscored 16-5 in the final eight minutes.

Both MA squads will play Wednesday of this week in the 3A North State Tournament ­ the girls versus Oak Hill at 6:10 p.m. And the boys versus Central Holmes at 7:30 p.m. The semi-finals are Friday and the consolation and championship contests Saturday. The top four teams (girls and boys) move on to the State Tournament next week at Oak Hill Academy in West Point.