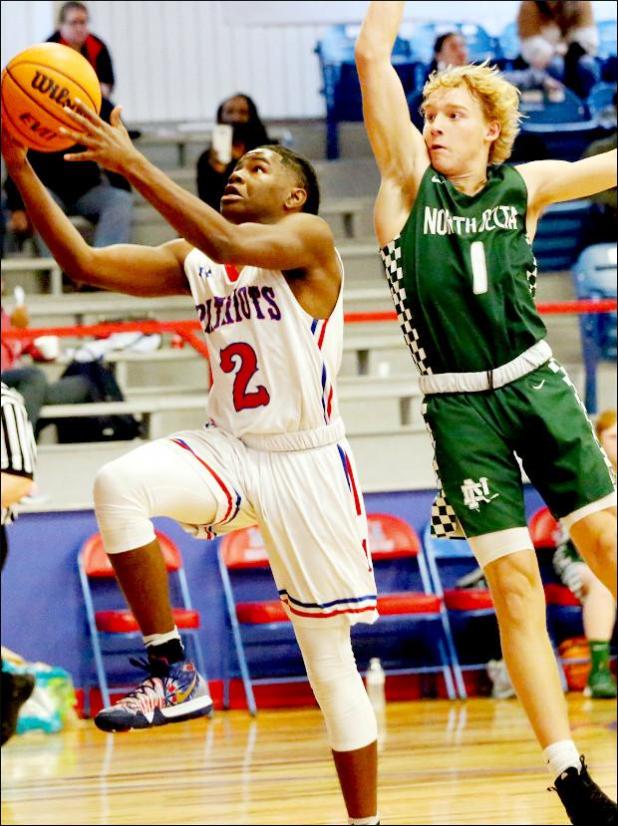 A big two-game series versus Clarksdale Lee awaits this week for the top seed in the post-season tournament. Both are 4-0 in district play.

The Patriots survived a road trip to Batesville Tuesday night, Jan. 19, winning 6753 over the Green Wave.

“We struggled with the zone early and finally got in a flow on offense,” coach Craig Dailey said. “We got some easy baskets off the press and knocked down some shots.”

Dee Howell was the main man for MA. He lit up the scoreboard for 28 points, with 17 of those coming in the first half.

“Dee had a tremendous offensive game,” Dailey said. “Thankfully, he is just barely touching his potential.”

The Patriots found themselves down 18-13 after one quarter, but the next eight minutes was a totally different story. They turned it up a notch defensively in the second period, outscoring North Delta 17-4 and taking a 30-22 lead to intermission.

Marshall maintained its momentum in the second half and won by 14.

“Drick got us some cheap points and was solid defensively,” Dailey said. “Rusty’s 10 points in the fourth quarter, including some big threes, put it away.”

Friday night at home, the MA boys pulled away in the second quarter and recorded a 60-27 win over North Delta.

After struggling in the opening period, the Patriots outscored the Green Wave 196 over the next eight minutes and took a commanding 33-15 halftime advantage.

Moore lit the spark in the second period, scoring eight of his 19. Howell also finished with 19 points. Jordan Bonds had eight.

“The kids did a great job, but it’s only going to get harder from here,” Dailey said.

“If Dee keeps developing as a player, we will be a tough out (in tournament play). Drick is on track to be the most improved player I’ve ever coached, and that’s pretty high cotton.

“Jordan had a really good game. I need him to be the post presence on both ends of the floor. He controlled the boards in this game, and I was proud of his effort.”

Lady Patriots The Marshall Academy Lady Patriots dropped both their games to North Delta last week and fell to 0-4 in district play. At Batesville on Tuesday, Jan. 19, MA lost 56-39.

Coach Jeremy Ervin’s Marshall girls kept it close most of the way Friday night on the home floor before falling 47-34 to North Delta.

Turner and Nicholson led the offensive effort with 10 points each.

The Patriots (8-7 overall) and the Lady Patriots (6-8) hosted Lee on Tuesday of this week. They go to Lee on Friday to wrap up the regular season.

Marshall Academy will host the district tourney next week, on Thursday, Feb. 4, and Saturday, Feb. 6.