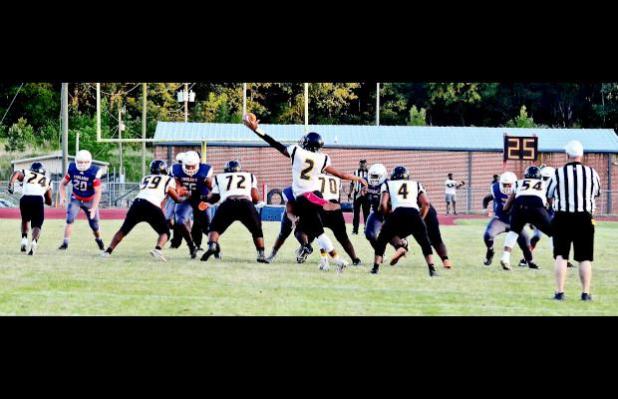 File photo by DeMill Dixon
The Holly Springs Hawks and Byhalia Indians are pictured competing during a spring jamboree match-up in May of last year.

High school coaches, unable to conduct spring football drills, are restructuring and facing uncertainty about the summer and even the fall.

Schools in Mississippi are closed for the rest of the academic year due to the COVID-19 pandemic, and that also means no sports activity.

"But we have to play the hand we've been dealt and make the best of it."

He said he has tried to stay in touch with his guys and encouraged them to do at-home workouts to stay in shape.

"Physically and mentally, we have to keep them as strong as we can from a distance," Hemphill said.

The Mississippi High School Activities Association has announced summer sports and activities cannot begin until June 1 or until further notice.

"If we are able to go with June 1, that's workable," said Hemphill, losing nine seniors from last year's squad. "All of our work will be fast forwarded, but I'm optimistic. We will just have to pick the ball up and get rolling."

"I lost eight kids who signed with colleges, so the spring was very important in our rebuilding efforts," Danley said. "We have a lot of young kids who could have utilized that time to get them better prepared." He continues to reach out to his players through virtual group meetings and texts.

"I just try to encourage them to do the things they need to be doing to stay in shape," Danley said. "I realize, too, that they are eager to get back to work, as a unit."

He hopes June 1 remains the date to renew sports activity, but he also knows there are no guarantees.

"If we can get back June 1, everybody will need to be involved and we will need to hit it really hard," Danley said.

A lot of strength and conditioning will take place, plus a lot of teaching.

"And even though I haven't been big on seven-onseven competition in the past, we will probably do more of that than ever if we have the opportunity," he said.

"I cut the grass on the football field every week, and that's keeping me going," he said.

He said he had hoped to primarily work on the Cardinals' passing game during spring drills.

"That's one of the biggest areas where we need to improve," Anderson said. "We're missing 14 days of practice, and that is going to set us back quite a bit.

"Spring is so important going into the summer.

"We are also losing three months (March, April and May) of weight training. That's crucial. You just can't replace three months of weights and the spring practices."

He is staying in contact with his Cardinals and sending out daily workout plans, as far as staying in shape.

"But it's just a weird situation," Anderson said. "We have no way to know whether or not they are doing it."

He said his players continue to ask, "When are we coming back?"

His response is, "hopefully, June 1."

There's eagerness from the players about getting back to work.

"In that regard, this could be beneficial," Anderson said. "They've been sitting at home, and they're excited about practice ­ probably more than ever."

He said plans will change for the summer, depending on the amount of days. Chris Daniels, head coach at H.W. Byers, said there is still so much uncertainty.

"You don't know when you are going to be able to get them in the weight room and playing seven-on-seven," Daniels said. "Hopefully, we can get them in here June 1."

Conditioning-wise, it's going to be tough.

"The kids have to do something on their own, and that's what we're emphasizing right now," he said.

Daniels will enter his eighth season as head coach of the Lions.

"That does make it a little easier ­ me being here and having our system in place," he said. "A new coach, it would be very tough on them."

But the bottom line is not seeing the players and being able to work them for three months ­ March, April and May ­ will have ramifications.

"It will have an effect on the product you put on the field," Daniels said.

"It is going to be an interesting year of football ­ at all levels."