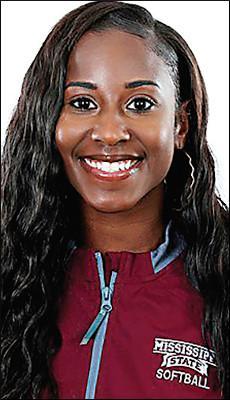 Kat Moore, a FirstTeam All Southeastern Conference outfielder for the Mississippi State University Bulldogs during the 2019 season, is the newest member of the East Central Community College softball coaching staff.

“We are extremely excited to have a player of Kat Moore’s ability join our coaching staff at East Central Community College,” White said. “She was an outstanding player at Mississippi State, and she will also be an outstanding softball coach. Kat and Mahalia will help our players to be the best they can be on the softball field, as well as prepare them for productive lives.”

Moore started 55 games for Mississippi State in her senior season in 2019, hitting .343, with seven doubles and career highs of four triples and 13 home runs. The 13 homers in a season puts Moore tied for eighth all time for the Bulldogs. In addition to her All-SEC Team accolades, Moore was named to the NCAA Seattle Regional All-Regional Team during postseason play.

Moore’s career batting average of .324 ties for 10th all-time for the Bulldogs.

A native of Holly Springs, Moore prepped at Marshall Academy where she was All-Conference four seasons and All-State three seasons. She hit .560 as a senior.

She received her bachelor’s degree in criminology from Mississippi State in 2019.