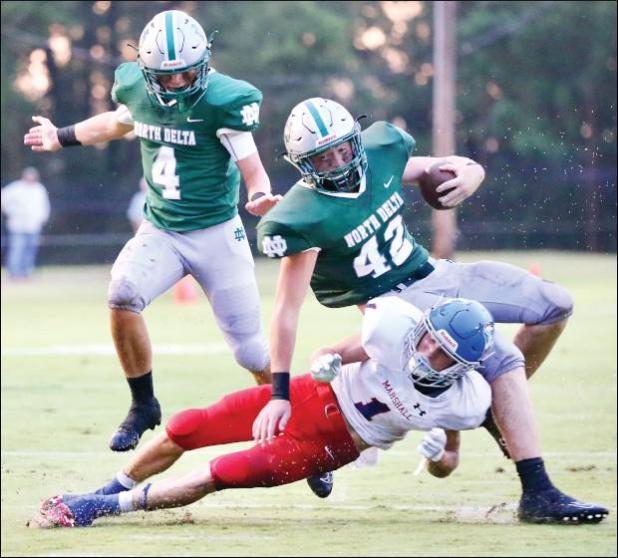 It was a tough opening assignment for the Marshall Academy football team.

The Class 3A Patriots visited 4A North Delta and had their share of opening night mistakes in a 14-0 loss to the Green Wave.

“North Delta is a good football team, with a lot of seniors, and I was concerned that we couldn’t match their intensity and that we would not be as physical as them,” said Tony Banks, new head coach at Marshall. “But we did that. At times, I thought we more physical than them, which is very promising.”

The game was played on a soggy field due to rainfall in pre-game. The two teams combined for 16 penalties, seven of those by Marshall. MA fumbled five times, losing two of those. North Delta had four turnovers.

“We just had a lot of mistakes, missed assignments — things that can be corrected,” Banks said. “If we can clean some things up, I believe we have a chance to be a good football team.”

The Patriots, with a new offensive scheme in 2020, had some chances. One of those came on their initial possession. Starting at their own 33, they used 11 straight running plays to reach the North Delta 34. The biggest was a 12-yard burst by Landon Houston. Colton Neal had three carries before having to leave with an ankle injury. A flag forced a punt.

The Green Wave also put together a drive on their first possession, with theirs resulting in points. Hawk Aldison did the bulk of the work on the ground. He scored on a 3-yard carry with 45 seconds left in the first period. MA’s Rod Moore broke up a pass try for the two-point conversion.

Marshall made good gains the next time it had the football but turned the ball over just inside North Delta territory.

“We had some drives and proved we can move the ball between the tackles,” Banks said. “But we’d fumble a snap or get a penalty and face a second and 13 or first and 15. That’s not what our offense is capable of overcoming right now.”

The Patriot defense rose to the occasion several times. Midway through the second and quarter, it halted the Green Wave on a fourth-and10 try at the MA 13.

Marshall fumbled the ball right back to the home squad but a few minutes later Ethan Helton hit North Delta quarterback Ryan Gibson for a 5yard loss on fourth and 11.

After a MA possession stalled, the half ended when Moore intercepted a desperation pass by the Green Wave.

The Patriots had perhaps their second best chance at points in the game early in the second half. Will Merrill recovered a North Delta fumble at the Green Wave 37-yard line. After gaining 5 yards on first down, the Patriots went backwards and couldn’t cash in the turnover.

The two teams swapped punts. Then the MA defense stepped up big-time again, halting North Delta deep in Marshall territory. Merrill hit the quarterback for a loss. Then on the next play, Houston recovered a fumble.

After a Patriot punt, the Green Wave’s Aldison got loose on a second-down play and traveled 36 yards for six points. Gibson kept for the two-point conversion. Marshall was down 14-0 with 7:31 remaining in the contest.

Marshall had one last chance at points when Jordan Bonds recovered a North Delta fumble, but a pass try on fourth and 4 fell incomplete.

“North Delta is in a higher classification, like about all of our non-conference opponents,” Banks said, “but there were certainly times that the game could have gone our way. We had our chances despite our mistakes. It’s the first game, and the mistakes made by the players and the coaches can be corrected.

“We have to improve in the passing game. I saw some good things. We have to just be better at what we do.”

Merrill was named Marshall Academy’s most valuable player of the game. He had three sacks and a fumble recovery, and he also forced a fumble.

The Patriots step up one more classification this Friday when they make a three-hour road trip to Pelahatchie to face 5A East Rankin, which defeated Central Holmes 34-6 in week one of the season.