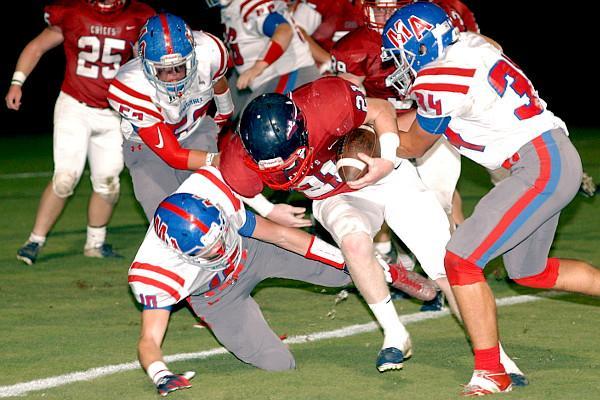 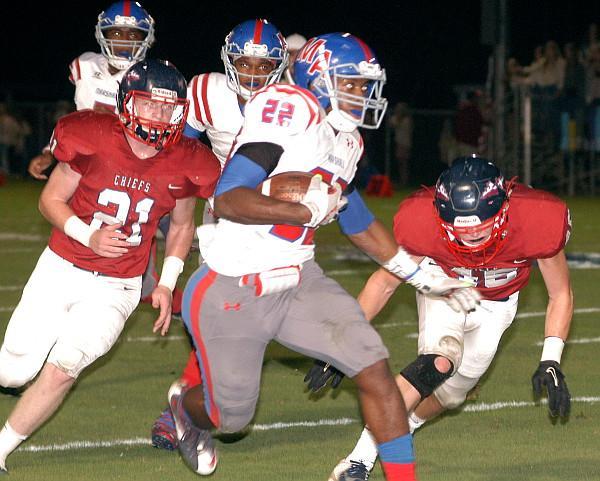 Marshall Academy lost its third straight game last Friday night but coach Barrett Donahoe felt much better after this one.

“The effort was there,” he said. “We played our guts out.”

The Class AA Patriots fell 30-6 on the road to Class AAAA Magnolia Heights. It was a 17-6 game at the end of the third quarter.

“We had scoring opportunities and didn’t execute,” Donahoe said.

The Chiefs took a 7-0 lead in the middle of the first quarter on Ford Wilson’s 1-yard run. Josh Tyson kicked the extra point.

The Patriots answered with a 68-yard, nine-play scoring drive. Phillip Parks ran for a first down and a couple of passes from Wyle McMillen to Everette Jones pushed the ball to the Chiefs’ 19.

Facing a fourth and 8 at the 17, McMillen threw to Jones, behind the line of scrimmage, and he in turn tossed to an all-alone Reagan White in the end zone for six points. MA’s try-for-two was unsuccessful with 2:06 left in the first.

MA reached the Magnolia Heights 12 early in the second but went backwards.

Then after the Patriot defense stopped the Chiefs, the offense fumbled the ball back to the home team, which took over at the MA 38.

It took Magnolia Heights just three plays to score, with Garrin Windham going up the middle from 16 yards out. Tyson’s kick made it 14-6.

The Patriots coughed up the football on its next possession too, and the Chiefs turned that into a 32-yard field goal by Tyson. It was 17-6 at the halfway point.

The Patriots started the third by driving to the Magnolia Heights 24 but again could get no points.

The Patriots moved all the way to the 4-yard line this time but a penalty pushed in the wrong direction and pass attempts on third and goal and fourth and goal from the 20 were unsuccessful.

Magnolia Heights scored  a pair of fourth-quarter touchdowns to ice the victory – Wilson on a 13-yard carry and Blake Kirby on a 2-yard quarterback keeper. Tyson hit one of the two extra-point tries.

“We’re getting better,” Donahoe said. “The last couple of weeks (in practice) we’ve focused on fundamentals, and that’s been a positive.

“We’re very, very close to being a good team. I think our guys grew up a lot Friday night against a very physical football team.”

Marshall (3-4 overall and 0-2 in District 1-AA) returns to district action this week when they host Carroll Academy. The Rebels are 5-2 overall and 1-0 in the district. They are coming off a 38-16 loss last week to non-district foe Tunica Academy.

Donahoe said his Patriots can still be a “dangerous playoff team” and that push starts this week.

“We have to continue to get better,” he said.