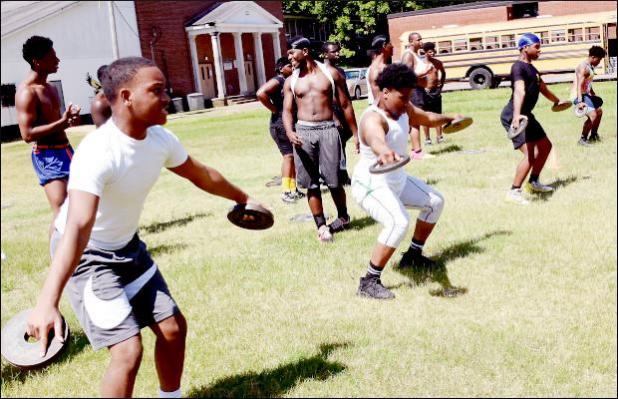 High school football season being pushed back a couple of weeks is receiving pretty much the same reaction from coaches in Marshall County.

“We’re just excited to get the chance to play this year,” said John Danley, head coach at Byhalia.

“We’re happy to get the chance to play,” said Sylvester Hemphill, head coach at Holly Springs. “We just want to have games.” The Mississippi High School Activities Association Executive Committee voted Tuesday, July 14, to delay the fall sports calendar two weeks due to the COVID-19 pandemic.

Football practice starts August 17. Scrimmages between two schools are allowed beginning August 28 with games starting September 3 and 4. The football playoff and championship dates are unchanged. Games scheduled for the original first two weeks of the season, August 21 and 28, will not be made up.

Some non-district, rivalry games in the state will not happen due to the elimination of the first two weeks.

A Marshall County rivalry, originally set for August 28, is surviving. The game between Class 2A Potts Camp and 1A H.W. Byers has been moved to September 11.

“Luckily, we both had open dates then,” Daniels said, “and that’s a game between two county schools that you want to keep on your schedule.”

The Lions kick off the season Thursday, Sept. 3, at home versus Rossville Christian Academy (Tenn.). They still have an open date on September 18, before they start district play.

The 3A Holly High Hawks will go to Alcorn Central for a jamboree Friday, Aug. 28. They start the season Friday, Sept. 4, at home versus Corinth. Holly High also recently added a September 25 game versus Kosciusko to fill an open date.

“We support the decision (to start the season later),” Hemphill said. “It’s probably for the best, and we are going to roll with it.”

At Byhalia, Danley said he certainly hopes the new start dates, for practice and games, will go unchanged.

“We want to get going and keep going,” he said.

The 3A Indians will open the season September 4 at Lewisburg. The first home game is September 18 against Center Hill.

Potts Camp will play at Tishomingo County in a scrimmage on August 28. The Cardinals then begin their campaign Thursday, Sept. 3, at home versus Falkner.

“It’s frustrating to have things up in the air (as far as plans for the season),” Anderson said. “I’m glad we have plans in place to play. Hopefully, everything will work out.” He said his numbers are

down in summer workouts because lots of the players have no means of transportation.

“Normally, we’ve picked up some kids, but due to the Coronavirus, we can’t pick them up,” Anderson said. “They want to come; they just don’t have a ride.”

He expects a roster of 35 to 40 players, and a large majority of those will be ninth and 10 graders.

“And a lot of those we may not see until school starts August 10,” he said.

“We will just work it all out as best we can.”

Teams in Classes 1A, 5A and 6A will play 10 regular season games, if no open dates.

Teams in Classes 2A, 3A and 4A will play nine regular season games, if no open dates.

State championship contests for all classifications are December 4 and 5.

Volleyball and cross country will start August 10 with first meet/match on August 24. Any meet/match lost due to delayed start can be rescheduled with permission from both school administrations. Post-season events remain the same at this time.

Executive director Don Hinton said the MHSAA will continue to make every effort to keep sanctioned sports and activities in place for the 202021 school year.

“We know how important these extracurricular activities are to the students, parents, families, schools and communities of our state,” Hinton said. “We’re staying optimistic and doing everything we can to move forward for the upcoming school year. We’re listening to and relying on the medical experts, government officials and school administrators who are working to manage this situation. This is something none of us have experienced before.”