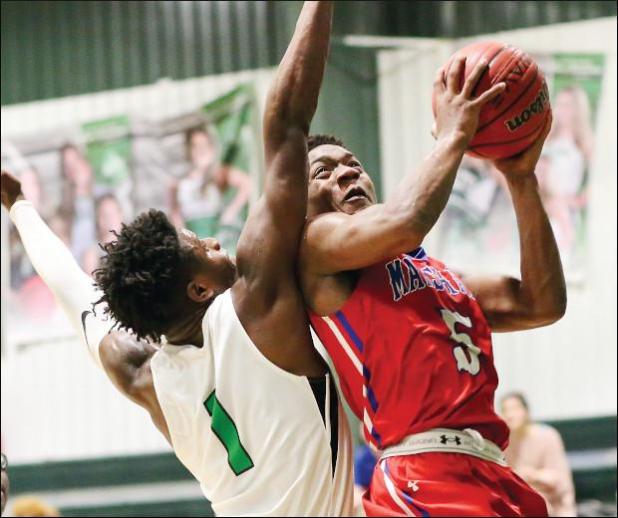 Photo by Theresa Bolden Devore
Philip Parks of MA takes the ball to the hoop with opposition from a Lee player.

It was a satisfying road trip to the Delta Thursday for Marshall Academy.

Both MA teams knocked off District 1-3A foe Lee Academy, the girls avenging a loss the previous week and the boys remaining undefeated in district play.

The Lady Patriots went into Clarksdale and stunned the Lady Colts 51-41.

"I'm proud of my girls for getting a big win on the road versus a team that beat us by 16 last time," coach Jeremy Ervin said. "We made some adjustments based on what they like to do defensively, and my girls executed almost perfectly. We also played out the defensive game plan very well. This should go a long way toward our confidence in the district tournament."

The MA girls surged ahead 7-0 but later in the quarter the game was tied at 8.

Karah Nicholson, who led the Lady Pats with 25 points, drilled a three to end the first quarter. MA was up 13-8.

The Lee Fillies pulled to within one to start the third. Then Kylie Gurley provided some spark for the Lady Patriots. She scored eight in the quarter as they pulled ahead 40-24.

MA was on top by as many as 21 in the fourth. Lee tried to rally, but the Lady Pats held off the charge and won by 10. The Marshall boys started slowly but bounced back for a 53-42 win at Lee.

"The guys knew we were going to be in a battle after we beat them in double overtime last time," Ervin said. "We went into a hostile environment and played like a championship caliber team should.

The Patriots found themselves down 7-0 three minutes into the road game.

Jordan Bonds nailed a three to provide some momentum. Then at the 1:40 mark, Jeremiah Jones scored off a steal and the game was tied at 7.

The Patriots had their advantage sliced to 36-32 after three. Philip Parks had all seven of MA's points in the third.

In the fourth, Sam Greer hit five of eight from the line to help nail down the 11-point victory.

Parks and Jones finished with 15 points each. Greer followed with 11.

"There's really no adjustments coaches can make to alter our speed, quickness and athleticism," Ervin said. "I also want to credit our tough schedule that prepared us for games like this one."

The Patriots survived a road trip to Macon Road (Tenn.) on Tuesday of last week, winning the district contest 62-54. They led 28-24 at halftime and outscored the home team 23-12 in the third to take control. Hitting in double digits were Jones with 18, Parks with 15, Greer with 14 and Rod Moore with 10.

Marshall Academy teams closed the week by splitting games with Kirk Academy on Senior Night in the Frank Swords Gymnasium.

The MA boys trailed much of the way but escaped with a 54-50 win over the Raiders.

The Patriots fell behind 31- 23 at halftime and rallied to tie the match-up at 37 entering the fourth.

Parks scored 10 of his game-high 25 points in the final eight minutes.

Kirk was down by two in the closing seconds and had possession of the basketball. Greer came up with a steal and passed to Jones, who scored the lay-up to seal it.

Jones had 15 points for Marshall. The Marshall Academy girls let a big first-quarter lead slip away and lost 47-31 to Kirk.

Nicholson hit a pair of threes to lift MA ahead 10-2. Keranie Jones drove to the bucket twice for points. It was 14-2. The lead was 16-4 at the end of the first.

The Lady Raiders dominated the second quarter and kept on clicking. They tied the game at 18 with 2:13 left in the second and led 24-20 at the half. They won by 16. Nicholson had 12 points for Marshall. Gurley followed with nine.

They wrapped up district play Monday by hosting North Delta. They visit Tunica Academy Friday for non-district contests. The Region 1-3A Tournament will be held next week at Kirk Academy in Grenada.