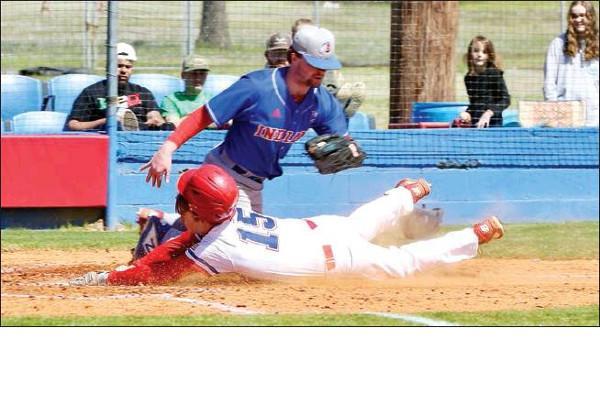 Byhalia’s Gavin Edwards puts the tag on Colton Neal (15) of Marshall Academy as he tries to swipe home. 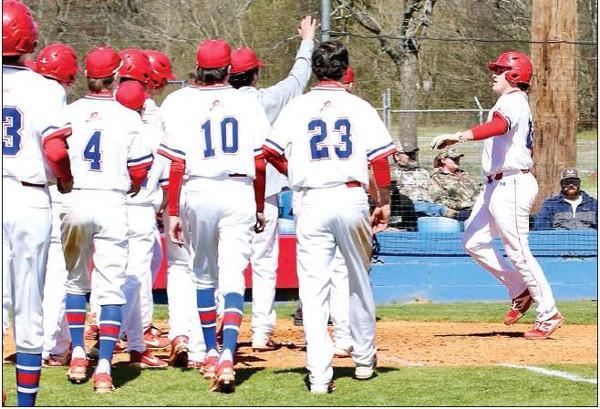 The odds were stacked, really stacked, against Marshall Academy getting a win Saturday afternoon.

“Byhalia had outplayed us for six and one-third innings,” coach Bruce Branch said.

The Patriots, trailing 8-3 with one out in the bottom of the seventh, rallied to send the game to extra innings and then won it 9-8 in the eighth.

“It’s goes back to what I’ve said about this team all season,” Branch said. “They’ve proven they’re going to play until the last out.

“We’ve proven we can score runs at any time. It’s not the first time we’ve put up a fivespot late in the game.”

Wyle McMillen delivered the big blow. His grand slam in the bottom of the seventh tied the game at 8.

“Wyle came up in a big situation and delivered, big-time (over the left-field fence),” Branch said. “It was a shot. There was no doubt about it when it left his bat.”

Sanders took the mound for MA in the top of the eighth and got two groundouts and a flyout.

In the bottom of the eighth, Rusty Bolden got a hit and stole second before McCarter drove him home with a single to the hole between third and shortstop.

“It was another heartbreaking loss for us,” said Hunter Gore, head coach of the Indians. “We just have struggled greatly finishing games. I guess it just wasn’t meant to be. We were going into the bottom of the seventh with a comfortable lead and our ace (Kyle Edwards) on the mound, who was pitching very well.

“It goes to show you that anything can happen in the game of baseball and you have to respect that. They were able to rally when it mattered most.”

The Indians came out swinging the bats well. They scored three in the first and two more in the top of the second. Their lead was 5-3 after two complete innings.

“Byhalia can hit the baseball – no doubt about it,” Coach Branch said. “They had us on the ropes.”

The Patriots went scoreless in the third, fourth, fifth and sixth innings.

Byhalia added two in the fifth and one in the seventh to grab the five-run lead.

Each team had 12 hits. Getting two each for Marshall were McCarter, Sanders, Neal, McMillen and Jordon Bonds. Bolden and Houston had one hit each.

Bolden started on the mound for the Patriots and threw two innings. Also throwing were Brayden Daughtry (four and a third), Mason Moore (two-thirds) and Sanders (an inning). Bolden struck out three, Daughtry five and Moore one. Bolden walked one, Daughtry three and Sanders one.

“Rusty did not have his best day on the mound,” Branch said. “We got some quality innings out of Brayden. Mason came in and got us out of an inning. And I really did not want to pitch Walker but at that point and time (top of the eighth) I wanted to do everything we could to win it.”

For Byhalia, G. Edwards pitched three innings and he was relieved by K. Edwards. G. Edwards struck out three and K. Edwards fanned five. Combined, they only walked three.

The Patriots (5-5) visited Winona Christian Tuesday in District 1-AA action, and then they host the same team Friday at 6 p.m. at home. Saturday, they will host the Tracy Rodgers Memorial Tournament. Next Monday, March 25, they host Memphis (Tenn.) Home Education Association and next Tuesday, March 26, they visit Central Holmes – both 6 p.m. for the varsity games.

The Indians (0-7) hosted Region 1-4A foe Corinth Tuesday, and they will travel to Corinth Friday for a 6 p.m. contest. Saturday, they will host Lake Cormorant at 1 p.m. Next Tuesday, March 26, they visit district opponent Tishomingo County at 6 p.m.

“The past few weeks have been tough for our guys,” Coach Gore said. “These losses are hard to bear but I hope they are learning what parts of their game they need to polish up on. Overall, we are satisfied with the level at which we are competing, however it hurts to feel you did everything you could do to win and you still couldn’t finish it out.”