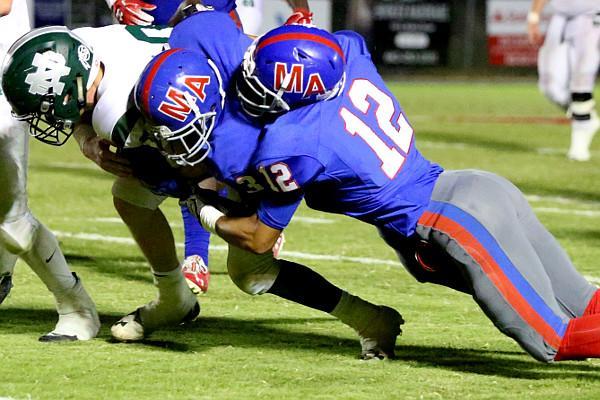 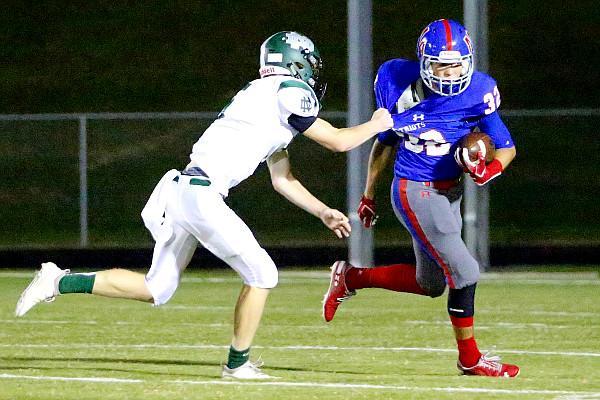 Photo by Theresa Bolden Devore
Drayton Potts (32) of the Patriots tries to escape the grasp of a Green Wave player.

The Patriots, who struck for two touchdowns in the first six minutes, let that lead slip away and went on to lose 40-20 at home to the Green Wave.

“We did a good job early of executing and putting some points on the board,” coach Barrett Donahoe said.

Phillip Parks provided the first big play. He got some blocking on the left side of the line, turned the corner and darted 69 yards for six points. The try-for-two failed.

The MA defense, led by Will Hanggi and Davarius Harris, was up to the task, stopping North Delta on a fourth-and-five try. Hanggi had a tackle for loss on third down and then a pass attempt was incomplete.

Marshall, taking over at its 39, scored on its second play. Wyle McMillen found an all-alone Everette Jones, who completed the 54-yard touchdown connection. The two-point try was not successful.

“Phillip had that big run, and then Wyle checked off at the line of scrimmage when he saw the wide open receiver (Jones),” Donahoe said. “Those were two positives that gave us some momentum.”

However, the Green Wave bounced back to take a 14-12 lead into the locker room at the half.

With 2:24 left in the first quarter, Jimmy Manues scored on a 4-yard run. Hayden Nelson kicked the extra point.

“I thought our intensity on defense was not what it needed to be after we went up 12-0,” Donahoe said.

The two teams then swapped some punts before Parks intercepted an Oak Hill pass and returned it 30 yards to the North Delta 32. But MA couldn’t cash in the opponent’s turnover.

That’s when North Delta closed the first half with a 13-play, 99-yard drive. It culminated with Ryan Gibson’s 4-yard quarterback keeper for the score. Nelson’s kick gave the visitors the lead.

MA got a spark to start the third. Hanggi recovered a North Delta fumble at the MA 37-yard line.

Facing a third and five, McMillen lateralled to Jeremiah Jones, who has missed the bulk of the season with an injury, and he threw downfield to his brother, E. Jones, for a 58-yard touchdown. The Patriots, after a two-point catch by Drayton Potts, were up 20-14.

That proved to be the home team’s last points.

Parks went out with an injury in the second half and Donahoe said, “We had no other running-back options (with other injuries on the team, too). We were not effective offensively after he left the game.”

North Delta answered the MA touchdown with a scoring drive, overcoming a pair of penalties and a first-and-30 situation. Jordan Cox carried 5 yards for the touchdown with 2:27 to go in the third. Nelson’s kick put the Green Wave up 21-20.

MA failed on a fourth-down try to start the fourth.

Five plays later North Delta was in the end zone again, Eli Robb from 6 yards out. Nelson added the kick.

The Green Wave tacked on two more touchdowns late in the fourth quarter – a 5-yard run by Luke Noah and a 3-yard carry by Brandon Henson.

Parks was MA’s leading rusher, 10 carries for 80 yards. E. Jones caught six passes for 130 yards, five from McMillen and one from his brother.

Hanggi had a huge night defensively – 19 and a half tackles. Harris had 11 and E. Jones eight. Zach Sorrell and Darian Houston each had six and Sam Greer five and a half.