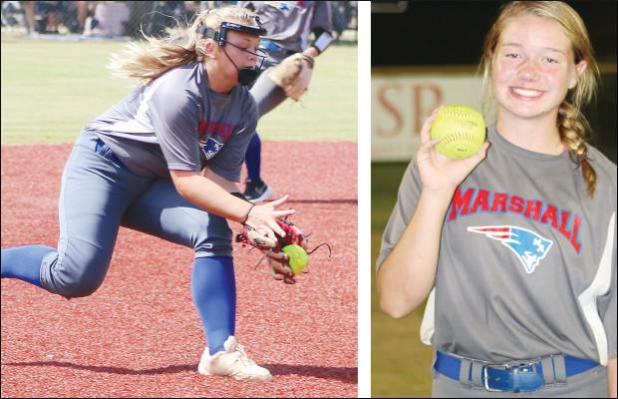 Photos by Angie Bain
(Left) Kylie Gurley fields a grounder versus Tri-County.(Right) Zoey Rippee shows off her home run ball from the win over Winona Christian.

Marshall Academy’s softball season came to an end Monday morning at the Class 3A State Tournament in Magee.

The Lady Patriots were stunned by Tri-County Academy in the opening round, bounced back to beat Winona Christian and then were eliminated by Bowling Green School (La.).

MA, the District 1-3A and North State champions, finishes the season with a 22-13-2 record.

“It didn’t end the way we had hoped,” coach Carlton Gibson said. “It’s time to get ready for next year.”

“And I also want to thank headmaster Barrett Donahoe and the board of directors for all the support they have given the program,” Gibson said.

Marshall and Tri-County battled to a 1-1 tie in regulation Saturday afternoon at Magee. Then the Lady Rebels had a huge top of the eighth, scoring five. The Lady Patriots got one run in the bottom of the eighth and fell 6-2.

Each team had five hits.

Getting one hit each for MA were Hallie Turner, Christa Schultz, Carlie Vannucci, Tyler Vannucci and Anna Lauren Bain. C. Vannucci and Bell each had a run-battedin.

For MA from the circle, Turner struck out four and walked three.

The Lady Patriots rebounded for a 13-2 rout of Winona Christian Saturday night.

They enjoyed two big innings, scoring six runs in the fourth and seven in the sixth. They racked up 17 hits.

Zoey Rippee had a big game from the plate. She drove in four runs with a double and home run.

Turner and Schultz had three hits each, with Turner getting an RBI. C. Vannucci had a pair of hits and three RBIs and Shankle and Bain each had two hits with Bain getting an RBI.

C. Vannucci earned the pitching win. She struck out eight, gave up five hits and walked none in six innings of work.

Bowling Green’s five-run first inning put the Lady Pats in an early hole Monday morning, and they went on to lose 8-1.

MA had seven hits. Turner and C. Vannucci had two each, while Schultz, Bell and Bain had one each.

Bowling Green added three runs in the top of the seventh.

The Lady Patriots’ only run came in the bottom of the seventh.

MA committed two errors in the field and had nine strikeouts from the plate.

Turner, who pitched for Marshall, gave up five hits, struck out seven and walked six.