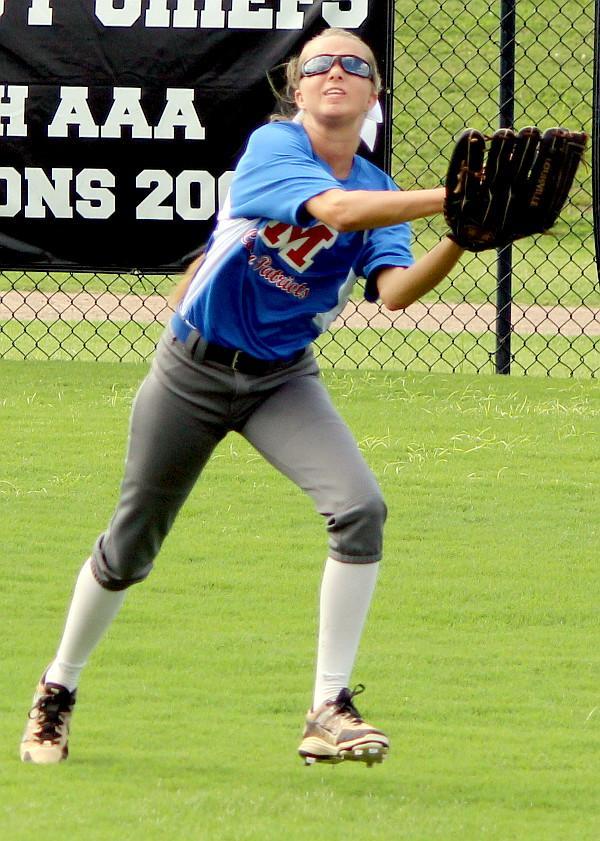 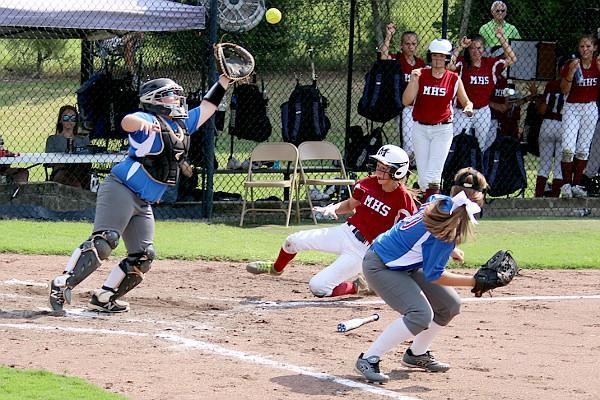 Photo by Penny Lomenick
MA catcher Tyler Vannucci tries to get out at home. In the foreground is her sister Carlie Vannucci.

The Marshall Academy softball team continued to play tough competition in the early portion of its schedule.

In their third game of the season versus the Lady Chiefs, MA fell 6-2 on Wednesday, Aug. 9, in Senatobia.

It was a pitchers’ duel. Each team had just three hits. Getting a hit each for MA were Hannah Champion, Baylee Floyd and Erin Lomenick.

Hannah Swallers pitched four innings for the Lady Patriots and Carlie Vannucci two. Swallers gave up one hit and four runs, while striking out five and walking two. Vannucci gave up two hits and two runs (one earned) and struck out one.

The Lady Pats were slated to play the Lady Chiefs a fourth time on Wednesday of this week.

“We are trying to play them as many times as we can because it is just good competition for us and it will help us get better,” coach Carlton Gibson said.

Champion hurled a no-hitter at home Saturday versus Calhoun Academy. MA won 13-0. She walked two and struck out three.

“Hannah pitched a good game, and we will need her come playoff time,” Gibson said.

The Lady Patriots scored nine runs in the first inning and four in the second to end the game after three and a half innings.

They had 11 hits. C. Vannucci carried the big stick with three hits and five runs-batted-in.  Picking up two hits each were Swallers, Champion and Lomenick. Adding one hit apiece were Alexis McGreger and Sarah Jackson.

This contest Saturday in Holly Springs went to extra innings scoreless. Bayou left for Cleveland with a hard-fought 2-1 win over MA.

“This was another evenly-matched contest for us,” Gibson said. “It came down to extra innings and we just could not get the hits we needed.”

Starting the eighth with a runner on second, the Lady Colts were able to execute and score two runs.

Then in the bottom of the eighth, the Lady Patriots only pushed one run across.

“It was a great game for us and will only make us better,” he said. “Playing these bigger schools will hopefully pay off in the end.”

Marshall had only four hits, and three of those came from the leadoff batter, McGreger. C. Vannucci had the other hit.

The Lady Patriots were slated to play Carroll Monday, Oak Hill Tuesday and Magnolia Heights Wednesday of this week.

They will play in the Tri-County Tournament Satur­day.