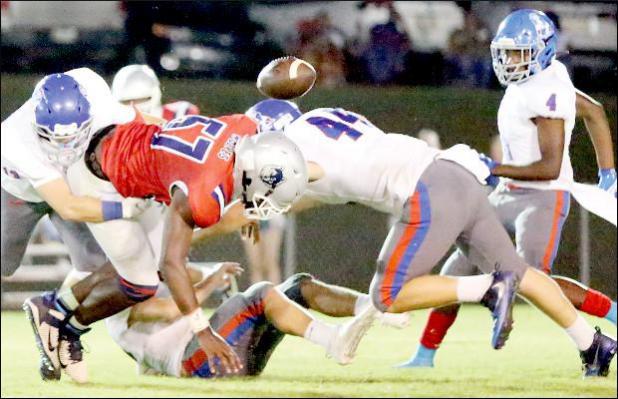 Photo by Theresa Bolden Devore
Colton Neal (on ground, in back) causes a Rossville fumble as Devin Sanders (13) and Ethan Helton (44) move in. At right is Rod Moore (4). Bo Martin (not pictured) recovered the fumble for the Patriots.

It was all Marshall Academy from the get-go Friday night.

Rod Moore returned the opening kickoff 84 yards for a touchdown, and the Patriots never looked back on their way to a 50-0 win at Rossville Christian Academy (Tenn.).

It was the District 1-3A opener for MA, which improved to 3-2 overall.

“It was good to give lots of people the chance to play,” head coach Tony Banks said.

“Sometimes in games like that you can get sloppy and unorganized but we didn’t and that’s a plus. All those guys practice, and they deserve to play, and they did well.”

Several Marshall starters were sidelined due to injuries.

“We were able to give them some time to heal, and hopefully we will get most of them back this week,” Banks said.

Colton Neal ran for the two-point conversion after Moore’s touchdown to make it 8-0.

Later in the first quarter, the Patriots used an eight-play drive to get their second touchdown of the night. Neal reached the end zone from 15 yards out. Quarterback Landon Houston kept for the two. It was 16-0. MA would light up the scoreboard with three second-quarter touchdowns to go up 36-0 at halftime.

Houston scored on a 17-yard run, and the try-for-two was not successful. Neal plunged into the end zone from 1 yard away and then also carried for the conversion. Gavin Coleman wrapped up the firsthalf scoring with a 1-yard run on the 10th play of the drive, and a pass try for the two-pointer fell incomplete.

In the third, Neal got loose and traveled 25 yards for six more points. Coleman carried for the conversion to make it 44-0.

Marshall Academy concluded its scoring in the fourth on a 4-yard run by Coleman. The try-for-two failed.

“I was proud of our guys; they played hard all night,” Banks said. “Our defense was dominating.” Leading the defense, which got the shutout, were Jordan Bonds and Moore with five tackles each. Moore also had a fumble recovery, which he returned 38 yards. Neal had three tackles and caused a fumble, and Bo Martin had a fumble recovery.

Houston was two of three passing for 41 yards, and he ran for 27 yards. On the receiving end of the completions for Marshall were Dunn Boatwright for 21 yards and Nick Henry for 20.

This Friday night the Patriots face another district foe when they travel to West Point to face Oak Hill Academy. The Raiders (1-3) are coming off a 33-0 loss to Winston Academy.