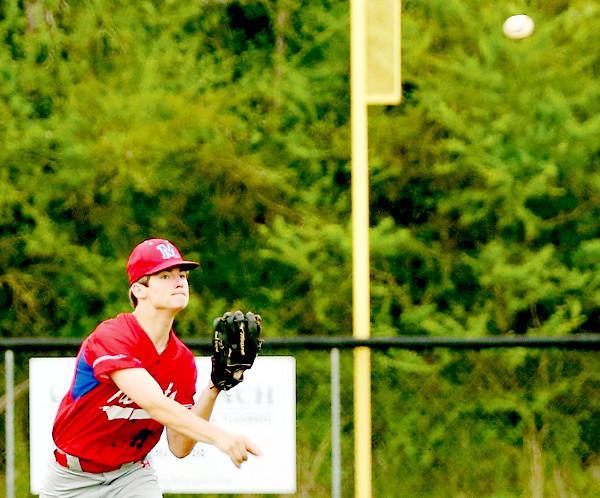 Photo by Theresa Bolden Devore
Third baseman Colton Neal throws across the diamond to first after fielding a grounder at Myrtle.

At home on Tuesday, April 9, the Patriots used a 12-hit attack to crush the Rebels 13-1 in four innings.

The biggest blow of the night was a grand slam in the bottom of the third inning off the bat of Darian Houston. He had three hits in the game and seven RBIs.

Rusty Bolden added two hits, including a triple, and two RBIs in the victory. Walker Sanders also picked up a pair of hits. Getting one hit each were ElijahMcCarter, Wyle McMillen, Colton Neal, Jack Whaley Smith and Brayden Daughtry.

MA scored one run in the first, five in the second, four in the third and three in the fourth.

Carroll’s only run came in the top of the fourth.

Sanders started on the mound, pitched three innings and got the win. He struck out five, walked one and gave up three hits. McCarter threw one inning, striking out one, walking one and giving up one hit.

The Patriots let an 8-0 lead fade away Friday night at public school Myrtle and lost 11-10 in extra innings.

McMillen provided the firepower early when he hit a three-run homer in the top of the first. MA added four in the second and one in the third.

The Hawks had a big bottom of the third, scoring four, and then they added one in the fourth to cut their deficit to 8-5.

MA was up 10-6 going to the seventh but Myrtle rallied to knot the contest.

Then the Hawks won it with a run in the bottom of the ninth.

The Patriots had 12 hits in the loss. Leading the way was McCarter with four. Adding two each were Houston and Jordan Bonds. Getting one hit apiece were Bolden, McMillen, Colton Neal and Sanders.

The Patriots (9-9 overall and 3-3 in the district) visited Carroll Academy Monday, and then they go to Oak Hill Wednesday. Both are district contests.

They will visit Northpoint Christian School in Southaven Thursday.