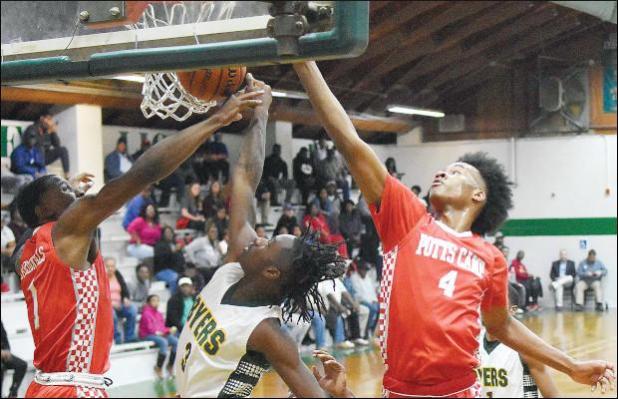 "I told them to stay in the game, don't let them get too far ahead, and maybe we could make an adjustment or two down the stretch and steal a win," he said. "And it worked out that way."

Class 1A Byers, playing on its home court, shocked county rival Potts Camp 63-59 Tuesday night, Jan. 7. The Cardinals moved up to 2A this season.

It was the Lions' seventh straight win after starting 1-8, and it avenged a loss to the Cardinals earlier in the season.

"I've been preaching to them that we won't face anybody in 1A as big as Potts Camp," Sales said. "I'm glad we pulled it out. The kids need that confidence-builder of beating a solid team."

Early on, the Cards' Mitchell Saulsberry dominated. His teammates continued to feed him the basketball, and he was a scoring machine. He scored 10 of his team's 16 points in the opening quarter as Potts Camp led by five.

He added 10 more in the second quarter, including a dunk that gave the Cardinals a 10-point advantage.

The visiting squad led by as many as 10 in the third, but Byers' Michael James drilled a three to cut it to seven.

Cedric Watson and Julian Moore drilled a couple of threes as the clock neared one minute left in the game. It was tied at 59.

James came up with a big steal and bucket. Devin Moore closed the game with a putback for the four-point margin.

"We just hung around and did what we had to do in the end to win the game," Sales said. "We're coming together. We just have to continue to work on the small things and get better.

"I guess we won't sneak up on anybody anymore.

"I know if we can play with Potts Camp, we have a chance to make a deep run (in the post-season). We just need to ride this momentum."

For the Cardinals (11-5), Saulsberry had a game-high 30 points, with 20 of those in the first half. Kedavian Faulkner added 11 and Walter Hamilton 10.

Potts Camp's Malasha Faulkner blistered the nets for 28 points as the Lady Cards downed Byers 55-39 in the first game of the night. M. Faulkner hit three threes and a pair of free throws in the opening quarter as the visiting squad went up 17-9. The Lady Lions, led by Jakorien Hubbard, made a run in the second quarter as they sliced the deficit to two.

Lady Cardinal Shaleigha Faulkner drilled a three and M. Faulkner added a steal and a bucket. Potts Camp had a 30-25 halftime advantage.

Potts Camp kept the momentum in the third and surged ahead 47-29 before winning the contest by 16.