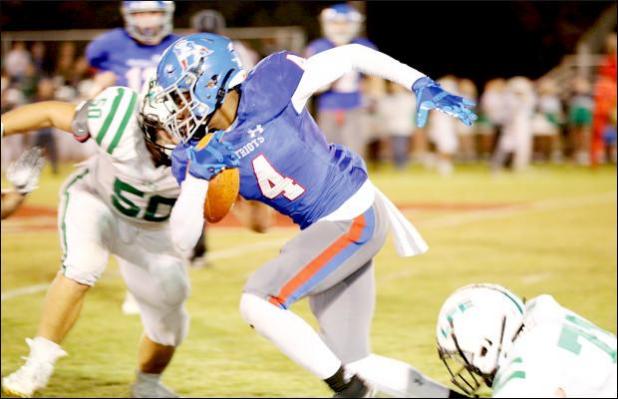 Photo by DeMill Dixon
Byhalia's Jacorian Smith (2) and Holly High's Lemon Phelps (14) leap for the football during the District 2-3A contest Friday night.

In big games it comes down to playmakers making plays, and both head coaches agreed that was the difference in last Friday’s Marshall County rivalry.

Sophomore Dustin Grisham, in his first varsity start at quarterback for Byhalia, got the offense clicking en route to a 42-24 win at home over Holly Springs.

“The situation was not too big for him,” coach John Danley said. “He really was the difference in the ball game. He spread the ball around and got the playmakers involved, and that’s what we’ve been missing.

“He stayed in the pocket, took his hits and delivered good passes, and those guys made the plays.”

Grisham threw for a pair of touchdowns, plus some crucial first downs, and Rayderrius Proge ran for four scores.

“Proge (a junior) can be special,” Danley said. “He is one of the best running backs I’ve had at Byhalia, and he has another year.”

Sylvester Hemphill, coach at Holly High, saw his team keep it close in the first half, trailing by nine.

“Playmakers make plays. That’s what the game comes down to; one-on-one matchups. Byhalia’s kids made the plays.”

The Hawks got off to a rough start. Byhalia’s Jacorian Smith intercepted a tipped pass on the first play of the game.

“We started off with a turnover, and that put a damper on things really early,” Hemphill said. “We gave them a short field and put ourselves behind.”

Later in the first, Holly Springs’ Robert Jones made the tackle for loss on Byhalia’s fourth-and-3 try.

The Hawks took over at the Indians’ 31. Quarterback Dylan King did most of the work on the ground before Jones scored the touchdown on a 2-yard plunge. A try-fortwo failed.

The Indians answered quickly. Grisham found Smith open over the middle, and the play gained 42 yards to the Holly High 18. On the last play of the quarter, Proge scored from 3 yards out. Sandoval’s kick made it 14-6 in favor of Byhalia.

The Hawks got a 23-yard kick return from Anthony Gulledge Jr., and then drove 53 yards in nine plays for points. King had a 15-yard keeper and Jones a 21-yard burst up the middle. King scored on a 3-yard run at the 6:56 mark of the second. The two-point attempt was not successful.

The Hawks were forced to punt but a miscue left Cameron Washington trying to run for a first. He came up short, and Byhalia took over at the Holly High 48.

The Indians kept the momentum to start the second half. Wooten had a 28-yard kickoff return, and a few plays later Proge scored on a 7-yard carry. Sandoval’s kick stretched the lead to 16.

The Hawks’ defense, with Kyrodrick Jeffries and Leonard Roberts coming through, got a stop on Byhalia’s fourth and goal from the 3.

But the offense couldn’t get going and punted.

The Indians had a short field and scored in four plays. Grisham passed to DeQuan Moore, who moved from quarterback to receiver, for the six from 18 yards away. Sandoval drilled the kick. It was 35-12.

With less than eight minutes to go in the game, King scored on a 1-yard run for the Hawks. The try-for-two failed.

The Indians responded with a 64-yard drive. Proge did most of the work, and he carried 13 yards for the touchdown. Sandoval finished his perfect night. The lead was 42- 18.

Holly High scored again in the closing seconds. After a completion to Washington and three to Keonte Jefferson, King threw to Gulledge for a 5- yard touchdown. A pass on the two-point try was incomplete.

It was the Indians’ sixth straight win in the rivalry.

Coach Danley named Grisham the Byhalia most valuable player for the game.

Coach Hemphill selected Clinton Hubbard, who had five solo tackles, three of them tackles for loss, and two pancake blocks as the Hawks’ MVP for the game.

“Holly Springs played hard, and we knew they would,” Danley said. “We have to play better defensively – too many missed tackles. But this was a good win, a confidence builder.”

The Indians, going to 1-5 overall and 1-3 in District 2-3A, can make the playoffs with a win this week at Independence.

“This is a big opportunity for us,” he said. “If we can make the playoffs, everyone is on reset – 0-0. I know we are capable. We’re getting better.”

The Hawks dropped to 1-7 overall and 0-4 in the district.

“I feel our kids played hard Friday night, but we just have to play better,” Hemphill said. “We couldn’t put everything together, and it’s frustrating. We have to play a complete game.”