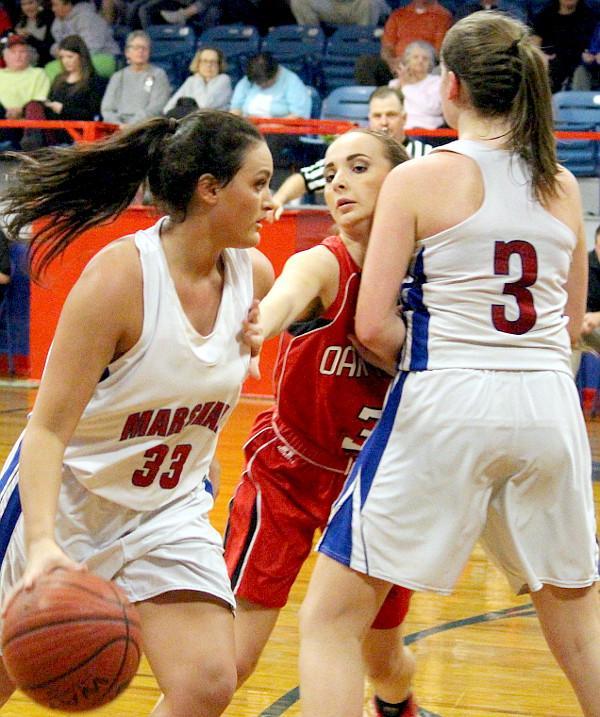 Photo by Penny Lomenick
Blake Martin (33) of MA uses a screen from teammate Julia Nicholson (3) on her drive toward the lane. 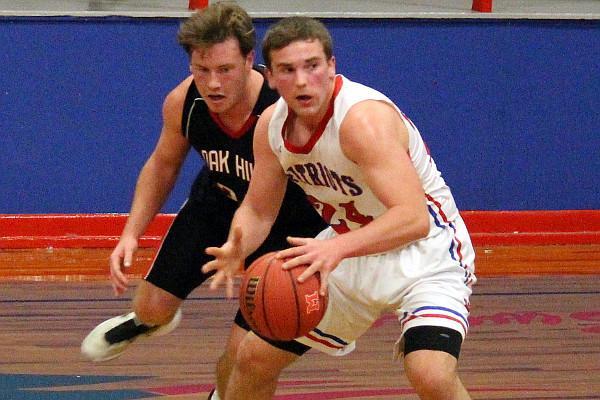 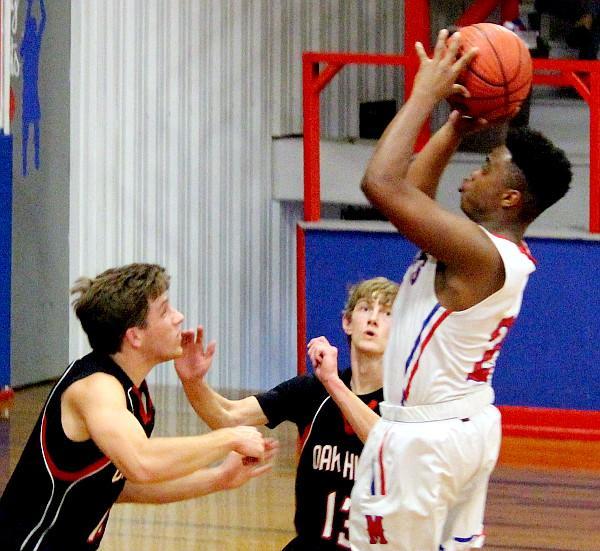 Rahmon Rutherford of the Patriots takes a shot versus Oak Hill.

It came down to two free-throw attempts with no time left on the clock Tuesday night of last week inside the Frank Swords Gymnasium.

And Marshall Academy senior Jacob Gadd calmly hit them both, giving the Patriots a 48-47 win over Oak Hill.

With three seconds left in the game, the point guard got the ball on an in-bounds play, drove quickly toward the hoop and was fouled on a jump shot just before the final horn.

The win avenged a one-point loss to the Raiders on January 14 in West Point.

Rahmon Rutherford led the Patriots with 19 points. Gadd finished with 13 including six of six from the free-throw stripe.

The game was tight throughout.

Gadd scored six straight points early in the first quarter as MA moved ahead 8-4. The lead was still four, 14-10, at the end of the opening period.

When Rutherford sank a three at the 5:19 mark of the second quarter, the Patriots had their largest lead of the night, 21-12.

Gadd drilled a three right before the halftime buzzer and Marshall was up 26-21 going to the locker room.

But with Rutherford leading the way, MA battled back. He hit a three with 4:40 left, scored on a fast break three minutes later and sank another long-range bomb with just nine seconds left. The Patriots were down by one, 47-46.

The Pats got the ball to half court with three seconds left, setting up Gadd’s drive to the hoop and ensuing free throws for the victory celebration.

The Lady Patriots, ranked second in the state in Class AA, struggled a bit in the early going but went on to rout the Lady Raiders 44-20.

Peyton Stephenson hit a three with 41 seconds left in the first quarter to give MA a 10-7 lead.

The Lady Pats went up by 10 (19-9) on Blake Martin’s three with 1:50 to go in the second quarter. And then Erin Lomenick closed the first half with a long-range shot. It was 24-11 at intermission.

Julia Nicholson’s putback upped the advantage to 28-13 early in the second half and then she closed the third quarter with a three-point play (basket and free throw) to put MA on top 40-16.

The Lady Patriots went on to win by that same margin, 24 points.

Nicholson poured in 18 points, while Martin scored 11 and Lomenick eight.

On Monday, Jan. 30, the Marshall Academy boys secured the top spot in the upcoming District 1-AA Tournament with a 56-49 win at West Memphis Christian (Ark.).

The Patriots battled back from a 25-22 halftime deficit.

They outscored the Black Knights 19-15 in the third quarter and 15-9 in the fourth to snatch the seven-point victory.

Gadd was the top scorer with 18 points, those coming on six three-point shots.

Peyton Taylor added 14. He hit three threes and was five of five from the free-throw line. Eli Pearson scored eight.

The Lady Patriots (23-6) and the Patriots (8-15) closed the regular season on Monday and Tuesday of this week by visiting New Albany and hosting H.W. Byers.

Marshall will host the District 1-AA Tournament Friday and Saturday. Next week, the North AA Tourna­ment will be held at Delta Academy in Marks.