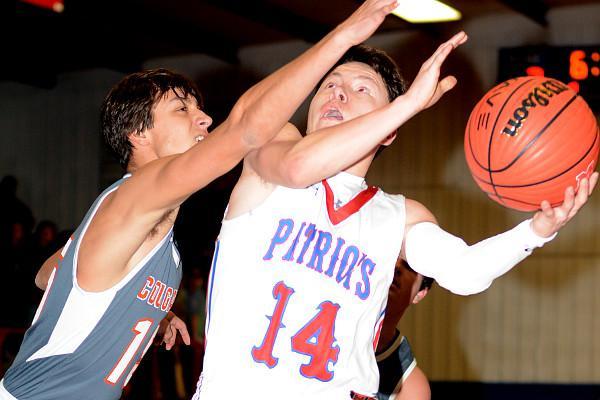 Photo by Dillon Day
Jacob Gadd (14) of Marshall goes for the lay-up as a Cougar provides opposition. 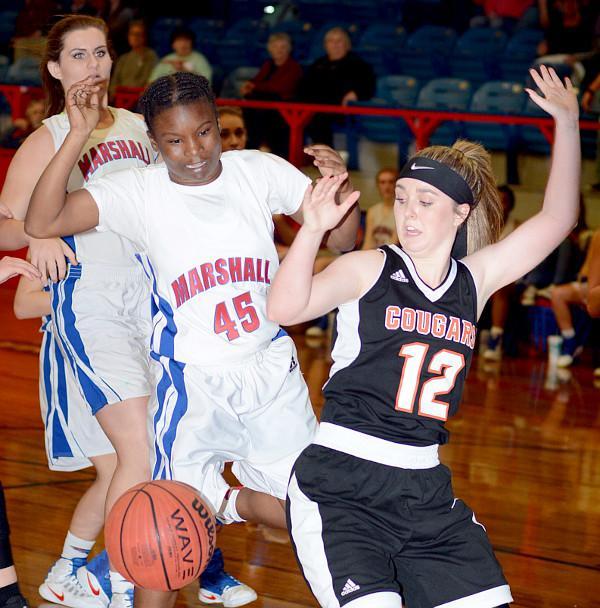 Marshall’s Jakhari Mitchell (45) battles for the loose basketball versus Lee. In back is Mary Neely Jones. 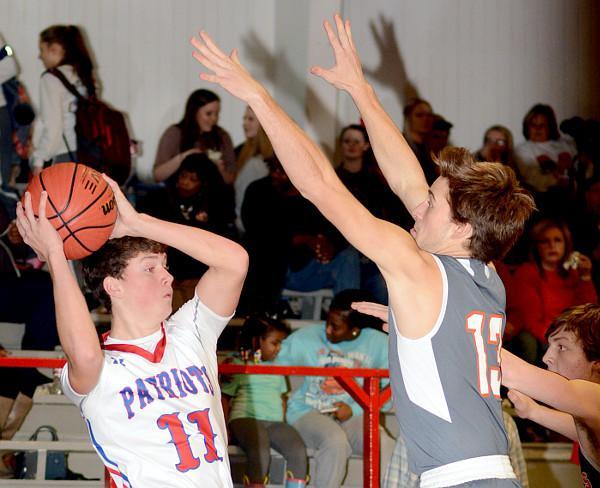 Eli Pearson looks to pass to a teammate. 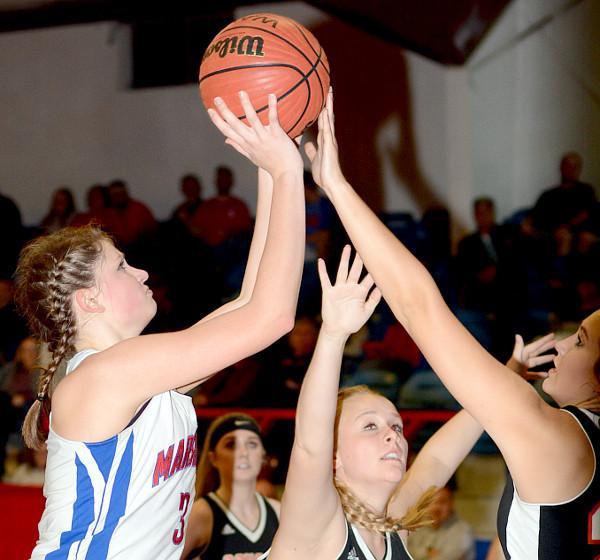 The MA boys split against the same two schools, crushing the Cougars by 36 and falling by one to the Raiders.

Nicholson poured in 22, with 15 of those coming in the first half. Martin scored 18, including five three-pointers.

Nicholson scored the first bucket of the third and Martin the first of the fourth. Then Erin Lomenick and Karah Nicholson closed out a solid night of outside shooting, each getting a three in the closing minutes.

In the second game of the night, Peyton Taylor drained five threes as part of a 19-point effort and the Patriots crushed the Cougars 56-20.

The Patriots took an 8-2 lead in the first quarter on a couple of nice assists from Rahmon Rutherford to Eli Pearson. The lead was 14-6 at the end of the first.

Boyce McKinney’s steal and lay-up put MA up by 10 early in the second quarter. Taylor drilled a three, and a couple of minutes later, Jacob Gadd converted a three-point play (lay-up and free throw) to up the advantage to 28-8. Taylor closed the first half with another three and the scoreboard read 38-13.

The Pats were on cruise control in the second half. Drayton Potts’ steal and lay-up made it 54-17 at the end of the third, and the home team eased to the win.

Gadd was also in double digits with 12 points.

The second-ranked Lady Patriots (17-5) made a statement Saturday evening in West Point as they knocked off defending state champ Oak Hill 55-27.

Martin scored back-to-back buckets in the third and then Alexis McGreger drilled a three as MA drove the nails in the coffin with a 40-15 lead.

Marshall closed the third with Martin’s assist to Nicholson and opened the fourth with Hailey McMinn’s putback.

Nicholson finished with a game-high 21 points. Martin was close behind with 19.

It was a barnburner in the nightcap as the Marshall boys fought back from an early 10-point deficit, enjoyed a lead and then dropped a heartbreaker, 64-63, to the Raiders.

The Patriots trailed 12-2 with 4:57 to go in the first quarter. But Taylor heated up from ‘three-land.’ He drilled a couple of long-range shots as MA was down by just four, 16-12, at the conclusion of the first.

A minute and a half into the second quarter, Potts sank a three and Marshall had its first lead at 17-16. The Patriots went up by as many as six and were on top 26-24 at halftime.

The teams swapped the lead a couple of times in the third. Rutherford hit back-to-back shots to put MA up 42-40. Another Taylor three gave the Pats a 47-44 advantage at the end of the quarter.

Marshall led by as many as seven in the fourth but couldn’t hang on in enemy territory. Gadd’s drive to the goal off a throw-in put MA ahead 63-62 with 17 seconds left. But Oak Hill cashed in a couple of free throws with eight seconds left and the Patriots’ try before the buzzer to win it missed the mark.