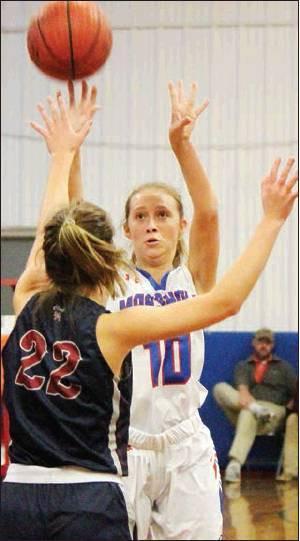 Peyton Stephenson releases a shot versus the Lady Chiefs.

The Marshall Academy Lady Patriots picked up the pressure when they needed it most Thursday night.

They trailed rival Magnolia Heights most of the way, but things changed in the fourth quarter. They rallied for a thrilling 38-31 home win.

“The full-court press turned the game around for us,” coach Jeremy Ervin said. “We were able to get steals and lay-ups which helped us get into a rhythm on offense and that carried us to the end of the game.”

MA was down 7-0 out of the starting gate. Kaylan Parks broke the ice with a pair of free throws. Marshall’s only field goal in the first quarter was a three from Keranie Jones.

The Lady Patriots were down 11-6 after one quarter and fell behind by 10 in the second quarter. Kaylee Patterson’s shot from the corner cut the deficit to 21-13 at halftime.

“The girls struggled early offensively and our defense kept us in the game,” Ervin said. “We were able to switch defenses frequently which kept Magnolia Heights guessing as to what to do on offense.”

Both teams had trouble scoring in the third. MA again fell behind by 10 and was down 25-18 entering the final period.

“The girls showed a lot of moxie by continuing to play hard and defend when we went down by 10 points,” he said.

Turning to the full-court press in the fourth, the Lady Pats created turnovers and put in points. Peyton Stephenson’s long three gave them their first lead, 28-27, with 4:28 remaining, and they never trailed again.

Magnolia Heights was held scoreless for a fourminute stretch in the fourth.

MA hit some key free throws down the stretch to seal the victory.

“I’m very proud of their effort and attitude, and the progress we’ve made since this summer,” Ervin said.

Parks finished with 15 points, nine of those coming from the charity stripe. Stephenson had nine points, all in the fourth.

The Marshall Academy boys also rallied in the second half but couldn’t complete the comeback, falling 51-50 to the Chiefs.

Jeremiah Jones tied the game at 7 on a three-pointer with 3:47 to go in the first. But MA couldn’t score the rest of the quarter and was down 13-7.

“We struggled on the offensive end all night,” Ervin said. “We couldn’t throw it in the ocean from the beach. And against a good team like Magnolia Heights, that’s hard to overcome.”

Zach Sorrell opened the second with a bucket. Then the Patriots fell behind by 12 but made a run late in the quarter. Sam Greer’s three sliced the deficit to 23-21. They were behind 25-21 at halftime.

MA went down by as many as five in the fourth, tied it again on Everette Jones’ steal and reverse lay-up, but lost by one.

J. Jones and E. Jones led the Patriots offensively with 13 and 12, respectively.

For the Chiefs, Seth Powell had 18, including four threes.

“Magnolia Heights was able to ride his hot hand to victory,” Ervin said. “He was hitting shots with a hand in his face all night. Hats off to that kid.

“We have to be able to play man-to-man defense better than we did tonight.

“All in all, I’m not disappointed in my team’s effort. We just have some fundamental things we need to tweak, and I have every confidence we will do that.”

The Lady Patriots (2-1) and Pariots (1-1) visited Greenville Christian Monday night of this week. They go to Columbus Christian on Tuesday, Dec. 4.