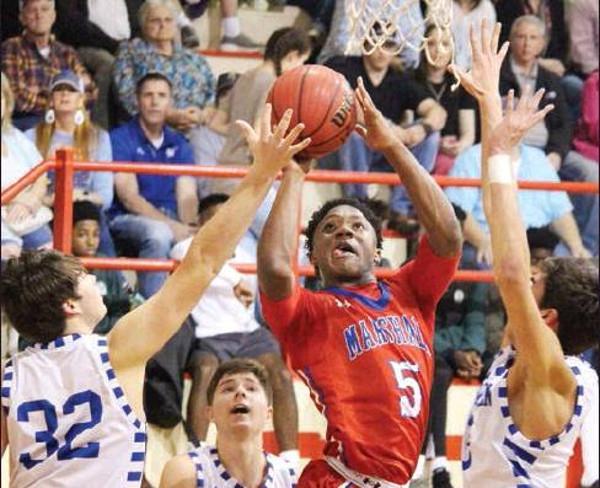 Photo by Penny Lomenick
Philip Parks (5), surrounded by three Cougars, gets off his shot Saturday night in the title game.

Points were at a premium, and unfortunately for Marshall Academy, Brookhaven Academy cashed in a few more.

The Patriots came up short in the Class AA state championship game, falling 37-31 to the Cougars Saturday night at Benton.

“Brookhaven is a really good, well-coached team,” said Jeremy Ervin, in his first season as head coach at MA. “They made it hard for us to run our offensive sets. They’re a really good defensive team. Their length gave us trouble in the paint. I’m proud of my guys’ effort. Brookhaven won the game on the boards.”

MA’s first field goal came at the 2:13 mark of the opening quarter. It came on a spin move to the goal by Philip Parks. The Patriots trailed 8-4 at the end of the first quarter.

The offenses of both teams continued to struggle in the second. MA fell behind by nine. Then Jeremiah Jones nailed a three and 30 seconds later dished to Zach Sorrell, who scored. The deficit was 13-9 at the halftime.

The Patriots cut the deficit to three three times in the fourth, once on a three by Sam Greer and, again on Parks’ drive to the goal and finally with just 47 seconds left on Everette Jones’ jump shot.

Brookhaven nailed some crucial free throws from there and won by six.

“We had one of those offensive nights where nothing would fall,” Ervin said. “Even point-blank shots were bouncing out. But that’s basketball, and that’s life.”

Named to the all-tournament team were Sorrell, E. Jones and Parks.

It was the second straight year for Marshall to fall to Brookhaven in the state title game. Last year’s score was 33-30.

The Patriots (25-5) moved on to the MAIS Overall Tournament this week at Mississippi College. They faced Jackson Academy Monday afternoon in round one.

It didn’t look good for the Patriots as the third quarter got underway in the semi-finals Friday. A halftime tie quickly went to an eight-point deficit, but Ervin’s crew did not quit. They stormed back for a 55-42 win over St. Joseph.

“We had to dig deep for this one, but my guys would not be denied,” he said. “When we got down by eight, a lesser team would have folded.”

The Irish’s star player, Dillon Johnson, drilled three threes in the third. He had a game-high 28 points.

“Philip (Parks), Jeremiah (Jones), Sam (Greer) and Everette (Jones) all took turns guarding Dillon Johnson, and they each did a tremendous job,” Ervin said. “The kid has scored 50 on a couple of occasions so holding him to 28 was actually a good thing.”

Both teams struggled offensively in the first quarter.MA went up 8-6.

The game was knotted at 17 at intermission.

Parks scored 10 and Sorrell seven in the fourth as Marshall took full control.

Johnson fouled out with 2:55 left in the game.

Sorrell’s three-point play with 2:01 left put MA up nine and sealed the victory.

Top scorers for the Patriots were Parks with 17 and Sorrell and E. Jones with 15 each.

“We had a very balanced offensive attack,” Ervin said. “That’s what makes us hard to guard.

“You can’t just pick one player to key in on. Zach (Sorrell) did a fantastic job leading his team on the floor and in the huddle.”

The first quarter was ugly in the quarter-finals Wednesday of last week, but for Patriots, the other three quarters were beautiful.

MA had a 6-5 lead after the opening eight minutes but cranked up the offense in the rest of the way and crushed the Lions 68-48.

Four three-pointers ignited the Patriots in the second period. Two came from J. Jones and one each from Potts and Wyle McMillen. The lead had exploded to 26-12.

The Patriots kept the momentum in the fourth. Sorrell sank back-to-back buckets and Parks hit a pair of shots on the fast break.

Marshall led by as many as 24 in the fourth before winning by 20.

Leading the way were Potts and Parks with 14 points each, E. Jones with 11 and Sorrell with 10.