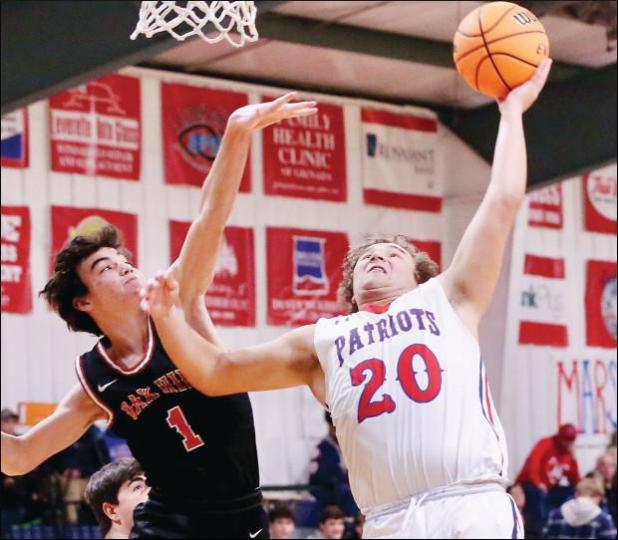 Photo by Theresa Bolden Devore
Jordan Bonds (20) of Marshall goes up for two points versus Oak Hill in the semi-finals.

The Marshall Academy Patriots came up a win short in their quest for a 3A North State championship.

Coach Craig Dailey said his team has to learn from the 55- 51 loss Saturday night to Carroll Academy and come back stronger this week.

“I know the kids are disappointed,” he said, “but they played their hearts out. We just didn’t play well enough to win – free throws, defensive letdowns and missed opportunities.”

The Patriots struggled offensively out of the starting gate. They were down 13-8 after one period. Jordan Bonds scored five of the eight.

Dee Howell scored 11 of his game-high 24 in the second quarter, but Marshall could not cut into the deficit, trailing 26-21 at intermission.

The teams played an even third, 13 apiece.

MA’s Walker Sanders hit a big three in the fourth but the Patriots could not complete the rally, falling by four.

Bonds also scored in double figures for Mar shall, with 10 points.

“They don’t give rings away for this blue trophy,” said Dailey, referring to first in the North. “It’s the next one (State) that everyone remembers.”

MA (14-8) faces Tri-County in the opening round at Oak Hill Academy. With a win, they meet either Clinton Christian or North Delta on Friday, Feb. 26, at 5 p.m. The tourney is slated to wrap up Saturday, Feb. 27.

The Patriots nailed down a 51-41 win over Oak Hill from the free-throw stripe Friday night in the semi-finals.

They hit seven of 10 tries in the fourth quarter. Sanders was five of six.

They fell behind briefly, 25- 24, in the third but bounced back strongly to take the 10- point victory.

Howell, who hit a pair of first-quarter threes, finished with 15 points. Sanders had 12 and Bonds 12. Rusty Bolden contributed nine.

In round one of North State at Kirk in Grenada, MA saw a big early lead evaporate versus Central Holmes but then pulled away again late, winning 47-31.

Bonds hit a couple of threes in the first three minutes, and the Patriots were on top 10-4.

Marshall had a lackluster third period. Central Holmes cut it to five twice, the latest at the 5:40 mark. Bolden and Howell hit key shots to swing the momentum back in the Patriots’ favor.

With the double-digit lead, Coach Dailey slowed the pace in the fourth and Marshall won by 16.

Bonds led the way with 16 points, and Sanders was close behind with 14.