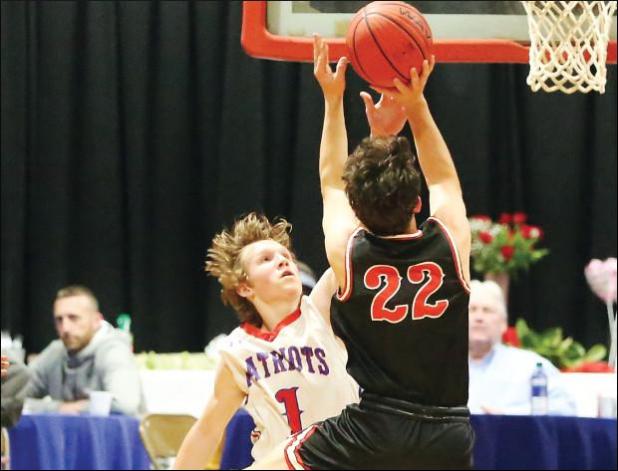 Marshall Academy could never get its game totally on track Saturday evening in Lexington.

The result was a 54-49 loss to Carroll Academy in the Class 3A North State championship game played at Central Holmes.

It was the Patriots’ third game in three days, following wins over Indianola Academy and Oak Hill Academy.

“I’m proud of my guys for the way they competed last week,” coach Jeremy Ervin said. “Three important games in three days is a hard thing to do, but the effort and hard work my guys showed are unmatched.

“One thing I can definitely say about my guys is that if we lose, it’s not because of lack of effort.”

The Patriots trailed by as many as 14 points late in the third quarter but did not quit. They cut the deficit to eight at the end of that period and pulled to within three, 33- 30, on Philip Parks’ putback with 6:17 left in the game.

But that was as close as they would get.

MA was down 51-40 with 1:02 to go before three late threes, one each from Jere - miah Jones, Jordan Bonds and Bo Martin trimmed the final deficit to five.

Most of the night, the Patriots struggled to get things going offensively, from the free-throw stripe and on the defensive boards.

“Carroll is a great team, but we didn’t do ourselves any favors,” Ervin said. “We didn’t rebound well at all, and I”m pretty sure Carroll’s first 12 or 14 points came from secondchance opportunities. You can’t beat a good team with statistics like that.

“Also, three-point shooting is fickle. They packed the lane defensively with big bodies and dared us to hit from outside. And Saturday night, we just didn’t have it in that area of the game.”

Parks poured in 20 points, with 12 of those coming in the fourth. Jones had 10 and Rusty Bolden nine.

The Patriots move on to the 3A State Tournament, scheduled this week at Canton Academy. They faced Riverfield Academy (La.) on Tuesday evening of this week. With a victory, they meet the Columbia- Lee winner Friday at 7:15 p.m. in the semi-finals.

A year ago the Patriots placed third in the North and went on to play for a state title.

“Here’s to history repeating itself,” Ervin said. “We have to keep our heads up, because this week at state is even more important than last week.”

MA turned the tide in the third quarter Friday night versus Oak Hill in the semis and went on to win, 57-49.

Bolden ignited the Patriots in the early going with a pair of threes. The game was tied at 11 at the end of the first.

Marshall then trailed 26-25 at intermission.

To start the third, Bolden scored, and MA never trailed again. Jones cashed in two on an assist from Parks. It was 39- 29 with 1:09 to go in the third.

The Raiders fought back in the last couple of minutes of the contest. They got to within 51-49 but Sam Greer and Bolden nailed some clutch free throws to ice the victory.

Greer opened the game with a three, and Bolden hit two long-range shots in the first quarter as Marshall got the offense cranked up.

Parks scored 11 in the third as the Patriots built a 35-point lead, which meant a non-stop clock in the fourth.

Parks, Jones and Greer were named to the all-tournament team at the conclusion of the event on Saturday.