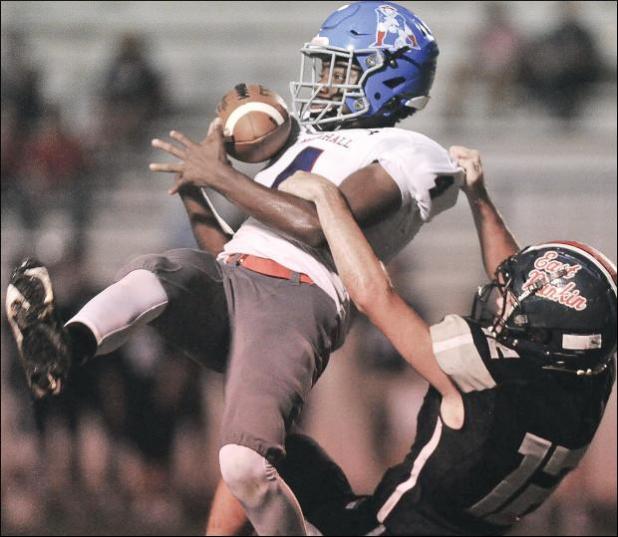 Photo by Rick Guy
Rod Moore of Marshall Academy tries to hang on to the football as an East Rankin Academy defender grabs one of his arms.

MA rallies past 5A foe

Things looked a bit bleak for the visiting team Friday night in Pelahatchie, at least for two and a half quarters.

Head coach Tony Banks said he was worried about a letdown after his team played so hard in a 14-0 loss at North Delta in week one and then had to make a three-hour road trip in week two.

“We were not ready to play,” Banks said. “We were not physical; we didn’t play our game. They (East Rankin) brought the fight to us. They executed, and we didn’t.”

MA trailed 7-0 at the half and then gave up a couple of quick scores in the third to go down by 20.

“We settled down and played our game, and the passing game came together, which really helped,” Banks said.

Jack Smith scored from 4 yards out late in the third to get Marshall on the scoreboard. Then early in the fourth, he carried 28 yards for six points. The Patriots were down 20-12.

“Jack gave us a big boost running the football,” Banks said. “That sparked the comeback.” Then Rusty Bolden reeled in a couple of touchdown passes from Walker Sanders to complete the rally ­ one covering 70 yards and the other 23 yards.

“They were crowding the line of scrimmage on us, playing nine in the box,” Banks said. “We had to try to take what they were giving us. We have to be able to throw the football in those situations, against man-to-man coverage, and we have the people to do it. Those were two really big plays, with our line providing protection, Walker making the throws and Rusty making the catches.”

He said the defense played well all night long ­ not giving up long drives, just a few big plays. One of East Rankin’s touchdown came on a pick 6.

“Our defense kept us in the game,” Banks said. “The defense played extremely well.” Leading tackles for the Patriots in the big road victory were Nick Henry, Ethan Helton, Will Merrell, Landon Houston, Cooper Cowen and Jamarius Rooks.

“Our secondary played well also,” Banks said. “East Rankin ran a spread offense, and we had to play a lot of man-to-man back there.”

He was very proud of his 3A Patriots for a comeback win on the road over a 5A opponent.

“It would have been easy for our kids to give up,” Banks said, “but instead they’re coming together as a team and trusting one another.

“We didn’t quit, that’s for sure. And that’s a sign that we’re growing up and becoming a team instead of a bunch of individuals.

“Everyone is doing their job.”

Myrtle finished 6-6 overall last season and lost in the first round of the playoffs. The Hawks return four of their starting offensive linemen and eight or nine starters on the defensive side of the football.